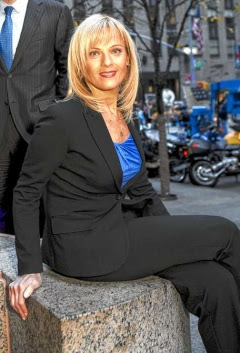 A process server hands Roderick Colvin papers at his parents home in Scarsdale, NY Wednesday. The Manhattan Public Administrator has filed a wrongful death suit against him, accusing him of killing wife Shele Danishefsky Covlin on New Year's Eve 2009. 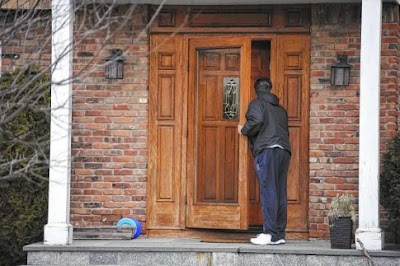 The Manhattan public administrator has gone where the cops and the DA have not: publicly accusing ex-stock trader Rod Covlin of killing his rich, beautiful wife two years ago.

Shele Danishefsky Covlin, 47, a UBS wealth manager, was found dead in her upper West Side bathtub on New Year’s Eve 2009. Her scalp was cut and the death was ruled an accidental fall.

Her Orthodox Jewish family refused an autopsy, and she was buried almost immediately, following religious tradition.

However, when detectives learned that the Covlins were in the midst of a bitter divorce, they dug deeper — literally.

The district attorney’s office persuaded Shele’s family to exhume the body, and in July 2010, the medical examiner ruled she had been strangled.

In later court papers, it emerged she told friends she feared her husband meant to kill her and she had obtained an order of protection.

Roderick Covlin, a former trader who founded the U.S. Backgammon Federation in 2009, has never been arrested or charged.

But now he is the target of an unusual wrongful-death civil lawsuit filed in Manhattan Supreme Court by Public Administrator Ethel Griffin, a little-known county official who handles estate complications.

Mitchell Studley, attorney for the public administrator, said the suit was filed ahead of any indictment because the office has a two-year deadline to file wrongful-death claims.

“There is still an active criminal investigation,” he said Tuesday. “We hope there will be a determination by the DA shortly.”

The public administrator’s suit aims to keep Roderick from grabbing half his wife’s assets, which by law he has to split 50-50 with their children, Anna and Myles.

It was Anna, then 9, who discovered her mother’s body in their condo on W. 68th St. Myles was 3 when he lost his mom.

Roderick Covlin did not return a call left at his parents’ Scarsdale, Westchester County, home, where he is living with the kids.

The U.S. Backgammon Federation website says he has stepped down as head of the group he founded and funded to “devote himself to some personal priorities that he wants to focus on for the near-term future.”

Studley said if Covlin is indicted and found guilty of killing his wife, he will lose his share of her estate, all of which would go to the children.

If he is never charged or is acquitted, the civil suit will proceed and he could still lose his share.

Shele’s brother Philip Danishefsky is seeking custody of the kids.