photo of Chabad emissary to Lithuania Rabbi Sholom-Ber Krinsky appears under a headline that reads: THE JEWS see no need to pay 'Sodra' taxes. 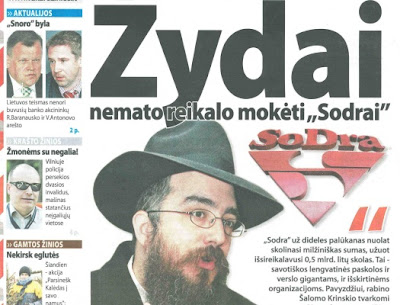 Vilnius, Lithuania - The Simon Wiesenthal Center today expressed disgust and outrage in response to the December 21 front-page of the Lithuanian tabloid Vakaro Zinios which can best be described as a “blatantly anti-Semitic attack on the Lithuanian Jewish community”. The front page bore an unusually large lead caption with only one word Zydai (The Jews) and an extremely large photograph of local Chabad rabbi Sholom-Ber Krinsky in ultra-Orthodox attire.

In much smaller letters, the explanation is given that the Jews, in this case, the local Chabad school, “see no need to pay their Social Security taxes.” Thus the impression is created that Rabbi Krinsky is the major offender in this regard, but if one bothers to read the accompanying article which begins on page one and continues on pages 3 and 5, it emerges that Chabad is only one of numerous institutions and companies (such as Western Union for example) which are guilty of the same offense and it is not even among the worst offenders who are specifically listed. In a statement issued today in Jerusalem by its Israel director Dr. Efraim Zuroff, the Center denounced the singling out of Chabad and noted its dangerous implications.

“The caption and photograph on the front page of Vakaro Zinios clearly create the mistaken impression that it is the Jews who are robbing the Lithuanian people. This type of blatant anti-Semitic lie is particularly reprehensible and dangerous in financially-beleaguered Lithuania and what is even more shocking is that this anti-Semitic incitement, which threatens the entire Lithuanian Jewish community, has not elicited a single negative reaction from any government official, religious leader or foreign ambassador.”
Posted by joe levin at 3:38 PM