Frame grab from video of an apparently drunken NYPD Sgt. Carlos Fabara being kicked off a Greyhound bus in Philadelphia Sgt. Carlos Fabara had 13 civilians lodge complaints against him in 2006. 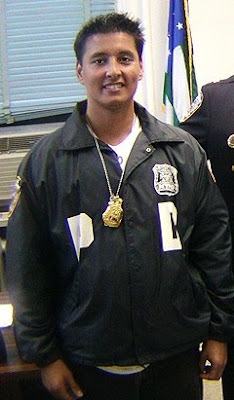 AN APPARENTLY boozed up NYPD sergeant, who has racked up a history of citizen complaints, was hauled off a Greyhound bus in Philadelphia by police, officials said Thursday.

The NYPD Internal Affairs Bureau is investigating the incident that left Sgt. Carlos Fabara in handcuffs and the star of an embarrassing YouTube video taken by a passenger, officials said.

In 2006, Fabara had 13 civilians lodge complaints against him, the most by an NYPD cop, the Daily News first reported.

In the video, first aired by Fox 5 News, the off-duty Fabara appears to be slurring his words and refusing orders from the bus driver and a security guard called to boot him off.

The incident happened Tuesday night at a bus terminal and delayed a full coach of passengers headed to New York by up to a half an hour.

“Let’s go! Let’s go now!” the security guard is seen in the video yelling at Fabara, who refused to budge from his seat.

Fed up passengers called the Philadelphia cops to assist the security guard. Some passengers began yelling and cursing at Fabara to get off the bus.

A Philadelphia police officer had little problem getting the veteran cop, who earns nearly $100,000, to stand up so he could be handcuffed and carted out.