L.A. - Night of fire in Hollywood

Burning up: A fire engine arrives at a blaze in the Laurel Canyon section of West Hollywood on Friday, where former Doors lead singer Jim Morrison used to live 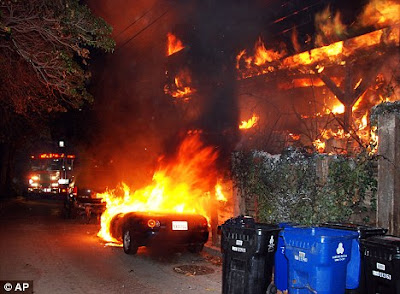 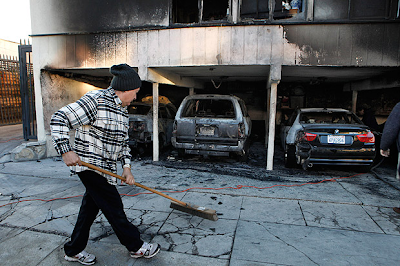 Video cameras may hold the key to solving a string of 19 arson fires set in Hollywood and West Hollywood early Friday morning.

Los Angeles Police Cmdr. Andrew J. Smith said investigators are scouring businesses and buildings in the vicinity of each of the fires for video cameras that might have captured images of the people or people who set the blazes.

The fires were set within blocks of each other -– and mostly started in cars, carports and trash, said Los Angeles Fire Department spokesman Eric Scott.

Police are also canvassing residents in the area of the fires. Police issued a citywide tactical alert at 12:45 a.m., allowing officers to work past their shifts. The Los Angeles Fire Department has doubled the number of arson teams on call to four.

In total, four suspected arson fires occurred in West Hollywood and 15 in Hollywood, including a blaze at the former home of Jim Morrison. Police said calls started coming in shortly after midnight.

The latest fires come a day after police arrested Samuel Arrington, 22, of Sunland in connection with three arsons that occurred on a five-block stretch of Sunset Boulevard on Thursday morning.

Smith said Arrington was caught "pretty much red-handed" and remains in custody.

Police and LAFD arson investigators don't yet know whether the rash of blazes Friday night was the work of a copycat connected to the earlier set of fires, that of an accomplice or accomplices in the earlier fires, or altogether unrelated, Smith said.