Shabbat phone: how to make kosher calls on a Shabbat 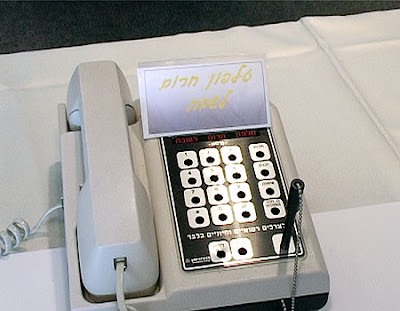 Adapting modern technology to ancient halacha, or Jewish religious law, is a challenge that Israeli experts have long relished. But the "Shabbat phone" is in a class of its own.

Orthodox Jews do not make or receive phone calls on the Sabbath ("Shabbat" in Hebrew), as the activation of an electric appliance – so that a current is introduced to a device – violates rules against starting or completing a project on the day of rest.

This has posed a problem for key senior military officers and public servants, who are observant or modern orthodox Jews but need to be on call 24/7. The Shabbat phone, from the Zomet Institute has been dubbed kosher as the current continuously runs through it, and increases when the call is made.

Twelve Shabbat phones were ordered six months ago for religious personnel among the Prime Minister Benjamin Netanyahu's aides, including the national security adviser, Yaakov Amidror. But Rabbi Yisrael Rosen, the head of Zomet, warned yesterday in the Maariv newspaper that this did not mean everyone could now enjoy social calls at weekends.

"The halachic approval was only given for essential workers and important needs like health, security, public services, water and electricity and so on," he said.

The Shabbat phone is kosher, but also slow. A conversation cannot take place until 20 minutes after dialling. Technicians claim they have a new version which cuts this to 10 seconds.
Posted by joe levin at 5:59 PM

Email ThisBlogThis!Share to TwitterShare to FacebookShare to Pinterest
Labels: www.independent.co.uk