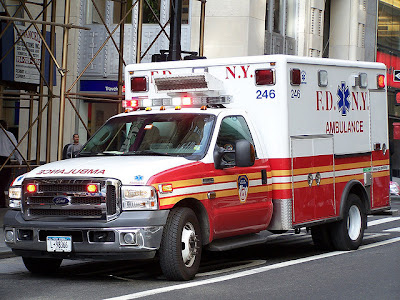 An 11-year-old girl was shaken up after running into a city bus in Williamsburg today, authorities said.

The girl smashed her face into the side of a B48 bus when she darted out from between two parked cars on the corner of Lorimer Street and Marcy Avenue at 9:37 a.m., said a spokesman for the MTA.

“She was scared,” said Jacob Lefkowitz, the girl’s father. “She was bleeding from her nose and mouth.”

The victim was taken to Bellevue Hospital by a Hatzolah ambulance in stable condition, sources said.
Posted by joe levin at 5:26 PM