Girl Gets Knife Past Airport Security, Takes Pictures Of It On Plane 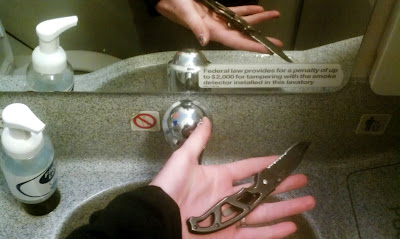 After a shocking photo of the knife one girl accidentally snuck on an airplane went viral on the social news site reddit, uploader sambojomo took to the comments section to clear the air and explain herself.

"For the record," sambojomo wrote after posting the photo on the social news website, "I was on an international flight and went through the x-ray scan, a manual inspection and customs before I went into my purse to get some eye drops and realized that I had forgotten to pack my knife in my checked luggage."

Amidst a few comments expressing concern, some commenters revealed they'd been through similar situations in the past.

While knives are pretty serious, there are a few items on the TSA's no-carry-on list that are slightly entertaining. For example: hockey sticks, ice skates, cattle prods, and gel shoe inserts are not permitted past TSA security.

Which forbidden item would you remove from the list?
Check out what people say is the weirdest thing taken from the TSA before boarding a flight in the slideshow below the photos.