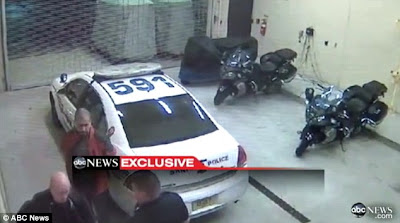 Doubt? Despite his lawyer's account that Zimmerman was knocked down and suffered a broken nose in a scuffle with Martin, the video shows no injuries consistent with his description 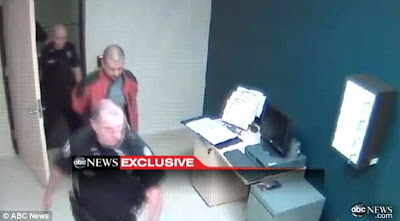 A police surveillance video taken the night that Trayvon Martin was shot dead shows no blood or bruises on George Zimmerman, the neighborhood watch captain who says he shot Martin after he was punched in the nose, knocked down and had his head slammed into the ground.

The surveillance video, which was obtained exclusively by ABC News, shows Zimmerman arriving in a police cruiser. As he exits the car, his hands are cuffed behind his back.

Zimmerman is frisked and then led down a series of hallways, still cuffed.

Zimmerman, 28, is wearing a red and black fleece and his face and head are cleanly shaven. He appears well built, hardly the portly young man depicted in a 2005 mug shot that until a two days ago was the single image the media had of Zimmerman.

The initial police report noted that Zimmerman was bleeding from the back of the head and nose, and after medical attention it was decided that he was in good enough condition to travel in a police cruiser to the Sanford, Fla., police station for questioning.

His lawyer later insisted that Zimmerman's nose had been broken in his scuffle with 17-year-old Martin.

In the video an officer is seen pausing to look at the back of Zimmerman's head, but no abrasions or blood can be seen in the video and he did not check into the emergency room following the police questioning.

Zimmerman was not arrested although ABC News has learned that the lead homicide investigator filed an affidavit urging Zimmerman be charged with manslaughter. The prosecutor, however, told the officer to not file the charge because there was not enough evidence for conviction.

Zimmerman said he was heading back to his car when Martin attacked him. His lawyer, Craig Sonner, said his client felt "one of them was going to die that night," when he pulled the trigger.

Martin's girlfriend, who was on the phone with him in his final moments, told ABC News in an exclusive interview that she has not been interviewed by police, despite Martin telling her he was being followed.

The 16-year-old girl, who is only being identified as DeeDee, recounted the final moments of her conversation with Martin before the line went dead.

Phone records obtained by ABC News show that the girl called Martin at 7:12 p.m., five minutes before police arrived, and remained on the phone with Martin until moments before he was shot.

DeeDee said Martin turned around and asked Zimmerman why he was following him.

"The man said what are you doing around here?" DeeDee recalled Zimmerman saying.

She said she heard someone pushed into the grass before the call was dropped.

Zimmerman, who had called 911, was asked by the dispatcher if he was following the teen. When Zimmerman replied that he was, the dispatcher said, "We don't need you to do that."

Martin's death has sparked protests across the country and prompted President Obama to say that if he had a son, he would look like Martin.

Over the past few days, leaks have emerged suggesting Martin was dogged by discipline problems.
Martin had been slapped with a 10 day school suspension after a bag with suspected marijuana was found in his backpack, Benjamin Crump, the family's attorney, said.

Last year the teen was suspended for spraying graffiti on school grounds. The Miami Herald reported that the school guard who stopped him searched his backpack and found 12 items of women's jewelry and a flathead screw driver that the guard believed to be a "burglary implement." But Martin was never charged or specifically disciplined for the incident.

Crump alleged that the Sanford police had leaked damaging information about Martin in order to muddy the case, calling it a "conspiracy." Crump called the school disciplinary problems "irrelevant" to the case that "an unarmed 17 year kid was killed."