Louise Neathway was hit with a 52-count indictment Friday, including charges of harassment and stalking, in her alleged shake down of Yankees GM Brian Cashman. 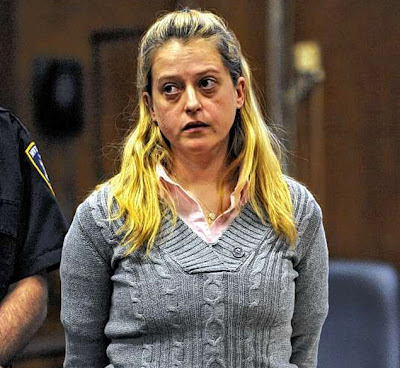 The single mom accused of shaking down Yankees General Manager Brian Cashman was socked with a 52-count indictment stemming from charges she harassed the baseball bigwig and five other men, court records unsealed Friday show.

Louise Neathway, 36, threatened to go public with her affair with the Bombers exec if he didn’t cough up $6,000, prosecutors charge. She allegedly told Cashman she was pregnant with his child and tried to get him to cough up another $15,000 for a “medical procedure.”

Prosecutors claim she took at least $50,000 or more from one of her victims, who a source said was not Cashman. Regardless, the alleged theft — the top charge of the indictment — carries up to 15 years in prison.

Neathway’s “Fatal Attraction” M.O. is nothing new, her ex-husband and former flames said.

Todd Hawk, 29, a Wall Street trader said that Neathway, who also goes by the surname Meanwell, tormented him for four years after a three-week fling. He said she violated numerous orders of protection and clogged his phone with hundreds of text messages.

“It was four years, nonstop — literally every single day,” he told The News after she was charged. “She used every avenue to get to me that you can think of.”

Neathway spent 40 days in jail last year after pleading guilty to trespassing on his mother’s property.

No fewer than 13 people have filed restraining orders against her since 1998 — including Cashman, his wife, his two kids, former beau Thomas Walsh, Hawk, her psychiatrist, ex-husband Jason Bump and his wife and mother.

Out of the 52 charges, the grand jury hit her with 21 counts of aggravated harassment — 10 of which were over the phone — and five counts of stalking.

Neathway has also been charged with perjury, which a source told The News is related to her grand jury testimony.

Her lawyer did not respond to calls for comment.