Rabbi Yehuda Kolko was indicted for molesting two boys – but in a plea deal was given a probationary sentence for child endangerment. 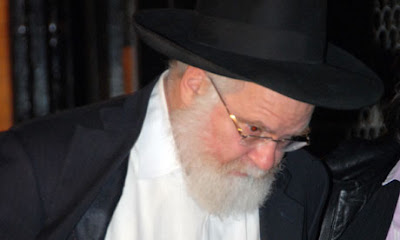 A systemic cover-up of child sexual abuse in Brooklyn's ultra-Orthodox Jewish enclaves continues to obstruct justice for young victims, despite claims by religious leaders and the Brooklyn district attorney that the problem is in hand.

A long-standing culture of non-cooperation with secular justice by Brooklyn's ultra-Orthodox Jews keeps many child sex offenders out of the courts and at large in their communities.

Hynes' recent claim to have radically increased prosecution rates for these crimes has drawn scorn from critics.

Brooklyn's Jewish communities, home to the largest number of ultra-Orthodox Jews outside Israel, are insular and close-knit. They maintain their own shadow justice system based on religious halachic law, enforced by religious courts known as the beit din. In recent years, they have also established their own community police force, the Shomrim.

Like the Catholic bishops before them, the ultra-Orthodox rabbis who lead these communities are charged with the concealment of crimes stretching back decades, and of fostering a culture where witnesses are silenced through intimidation.

"The rabbis are still, to an unfortunate degree, protecting the system," said victims' advocate Rabbi Yosef Blau, a more moderate Orthodox rabbi than his Brooklyn counterparts and spiritual advisor at Yeshiva University. Blau said the community feels it has to protect its image. "The battle is over the cover-up. That's what we're fighting now."

Until the late 2000s, only a handful of ultra-Orthodox child sex crimes made their way into the criminal courts.

Hynes' office says that between April 2009 and November 2011, there were 85 arrests with 47 of those cases pending. Of the 38 closed cases, it said, six had gone to trial, 23 had ended in plea deals and nine with acquittals or dismissals. These figures contrast sharply with the negligible prosecutions in the years between Hynes taking office in 1990 and the start of Kol Tzedek.

But they also represent a mere fraction of the incidents of abuse that advocates say they hear about. Because of scant reporting, there are no statistics for child sexual abuse in these communities. Most, however, believe the numbers are at least consistent with broader society if not higher.

Even the most outspoken advocates acknowledge some positive change – primarily a growing community acceptance of the problem and a slight increase in reports to the authorities.

Nonetheless, they accuse Hynes and the religious leadership of playing a PR game.

Ben Hirsch of victims advocate group Survivors for Justice said, "The DA has been very reluctant to prosecute these cases.

Recently he's become a little more aggressive in response to pressure from advocates and critical stories in the press. But he's still not behaving in a way that's consistent with the way he treats non-Orthodox cases."

Hirsch points to the DA's blanket refusal to release information about recent arrests and convictions, his controversial plea deals and the number of cases that by the DA's own admission have collapsed due to witness intimidation.

The DA's spokesperson, Jerry Schmetterer, said it was policy not to discuss child sex crimes with the media in order to protect the victims' anonymity.

But Dan Schorr, a former sex crimes prosecutor at Queens County and Westchester County, said the policy was surprising.

In Schorr's experience, publicising the names of suspected child molesters, except in cases where that might identify the victim, is one of the best ways to strengthen a prosecution "and prevent the abuse of other children".

All other New York City DAs decide whether to publicise details of arrests and convictions for child sex crimes on a case by case basis. (The identity of the victim, however, will always be protected.)

The Brooklyn DA's office has also broken its own stated rule, for certain cases, in recent years.
The most infamous plea deal, often cited by advocates, was in the case of Rabbi Yehuda Kolko.

In 2007, Kolko, a teacher and summer camp counsellor, was indicted for molesting two boys aged eight and nine. But under a plea deal, Kolko was only convicted on child endangerment charges, given a three year probationary sentence with no requirement to join the sex offender registry.

Kolko's prosecution followed an earlier civil suit against the school by two adult men who claimed they were also abused as children – one in the late 1960s, the other in the mid 1980s. The suit, which was dismissed on statute of limitations grounds, alleged Kolko's principal knew he was a serial molester, but suppressed the allegations.

Stefan Colmer's conviction is also controversial. Colmer was indicted on 37 charges after abusing two teenage boys, but in June 2009 he pled guilty to just eight counts of criminal sexual act in the second degree and was sentenced to two-and-a-third to seven years jail time. Colmer was released last month.

To date, and to the best of our knowledge, only eight Orthodox Jews prosecuted in Brooklyn have been required to join the sex offender registry, established in 1996. Of those eight, only four received custodial sentences, four were given probation.

The Guardian knows of two cases which have closed since the beginning of the year.

Joseph Passof had been facing 12 charges, including six felonies.

But under a plea deal he was allowed to plead guilty to two counts of sexual abuse in the first degree - a less serious charge for which he would receive 10 years probation with a treatment programme.

While this is a standard sentence for the charges Passof pleaded guilty to, former prosecutor Dan Schorr said he would consider the disparity between the original charges and the eventual sentence a disappointing outcome. Passof's sentencing hearing has been adjourned until May.

The case against David Greenfeld for child molestation collapsed in January after the DA failed to bring a case in the time allowed. The DA's spokesperson said this was because the victim's family was not co-operative.

Child sexual crimes are notoriously hard to prosecute. An apparently strong case at arrest stage can become considerably weaker as the prosecution progresses. DNA evidence may not support the allegations, for example. In ultra-Orthodox abuse cases, witnesses also frequently pull out.

DA spokesperson Jerry Schmetterer admitted cases collapse because victims are pressured by their communities. "If [victims and their families] come to us with an allegation or any concern that they are being intimidated we will take action to help them," he said.

But Mark Meyer Appel of victim support group Voice of Justice said the DA is not doing enough. "They should be going out to the community to find out why these victims are dropping out."

In the face of powerful community non-cooperation, Hynes faces a genuine obstacle. Rabbi Mark Dratch, a modern-Orthodox rabbi who founded JSafe to tackle abuse in the Jewish community, said: "Unless you get the trust of the community, you're not going to get the reporting.

If, however, you're less than responsible about how you get the reports, you're not really solving the problem."

Dratch believes Hynes is being influenced by religious leaders: "The DA's position is an elected position, and the orthodox have a large voting bloc and I'm sure Mr Hynes will deny it but I think that is the nature of the situation.

I know there is a lot of pressure on his office from the organised rabbinic community in Brooklyn either not to deal with the cases or to minimise them."

Rabbi Blau said the cases coming to court reflect the nature of Hynes's arrangement with community leaders. "Yes, Hynes has got a number of cases into the courts, but they're all the nobodies.

They won't get somebody prominent because then the community won't co-operate. But if it's some weird guy, OK, let the police handle it."

Blau's analysis is supported by Joel Engelman, an abuse survivor and spokesperson for the victims, who follows these cases closely. Engelman said that of the handful of defendants currently in the system, most are on the fringes of Brooklyn's ultra-Orthodox communities, rather than their leaders and power brokers.

Both the DA's office and rabbinical leaders deny there is a deal. Both insist they are doing all in their power to solve the problem.

But in recent months, the leaders of Agudath Israel of America, an umbrella body for Brooklyn's ultra-Orthodox Jews, has clarified its position on reporting abuse to the police.

To avoid the ancient prohibition against mesirah – the act of handing over a fellow Jew to secular authorities – Agudath directs its members to consult with a rabbi first, before calling children's services.

The rabbi must establish whether the suspicions are weighty enough to justify a report. "A person can be destroyed if allegations which are baseless are raised against him," said Agudath's executive vice-president, Rabbi David Zwiebel.

While some observers are encouraged that Agudath is now at least recognising secular justice, others are horrified.

"This is the latest outrage from Agudath Israel," said Eliot Pasik, a lawyer who has represented Orthodox abuse victims, including those of Yehuda Kolko. "In the name of maintaining what they think is the best image possible, they've become ideological fanatics."

There are some signs of a growing schism within the rabbinic leadership – including inside Agudath – even if most critics are still afraid to speak up. In a significant move last summer, the Crown Heights Beit Din declared it will no longer handle child sex abuse cases, which it said must be taken to the secular authorities.

But progress, say advocates, is far slower than the official picture suggests.

Last November, the Jewish radio show Talkline held a heated debate on child sexual abuse. Zvi Gluck, a community mediator who helps other ultra-Orthodox Jews in trouble with the law, rang in to say the DA's arrest figure was "not a real number". Gluck said he knew most of those arrests, "and most of those, because of pressure within the community, were dropped and resulted in nothing happening".

Gluck added he knew of at least three abused children who had committed suicide in recent months. "As Frum Yidden [observant Jews] we have an obligation to protect our community and our children. We are making progress but they are small steps and we are nowhere near where we need to be."

Zoë Blackler • The Guardian
Posted by joe levin at 8:59 PM