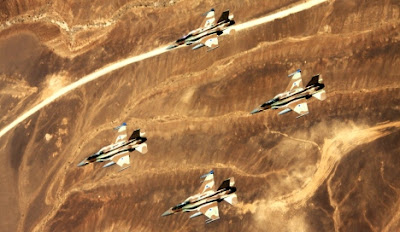 
"The Israelis have bought an airfield," a senior U.S. administration official told Foreign Policy's Mark Perry, "and the airfield is called Azerbaijan."

According to the report, U.S. intelligence officials are worried that Israel's military involvement in Azerbaijan would make it more difficult for the U.S. to reduce Israeli-Iranian tensions. Apparently now, military planners must prepare for a war scenario that would also involve the Caucasus.
"We're watching what Iran does closely," said a U.S. intelligence officer involved in assessing the consequences of a potential Israeli strike on Iran. "But we're now watching what Israel is doing in Azerbaijan. And we're not happy about it."

In February, Israel signed a $1.6 billion arms deal with Azerbaijan, committing to sell drones and anti-aircraft missile defense systems to Baku. According to a retired U.S. diplomat, the deal left Turkish Prime Minister Recep Tayyip Erdogan "sputtering in rage," since Israel had previously canceled a contract to develop drones with the Turkish military.

The report said that the Azeri military has four abandoned, Soviet-era airfields that could be available to Israel and four air bases for their own aircraft, quoting the International Institute for Strategic Studies' Military Balance 2011.

U.S. officials told Foreign Policy that they believe Israel has been granted access to these air bases through a "series of quiet political and military understandings."

"I doubt that there's actually anything in writing," said a former U.S. diplomat who spent his career in the region. "But I don't think there's any doubt - if Israeli jets want to land in Azerbaijan after an attack, they'd probably be allowed to do so. Israel is deeply embedded in Azerbaijan, and has been for the last two decades."

The report states that Israel's embassy in Washington, the IDF, the Mossad, and the Shin Bet were all asked to comment on the story but failed to respond. Also, the Azeri embassy to the U.S. did not respond when asked about Azerbaijan's security agreements with Israel.

Earlier this month, Azerbaijan authorities arrested 22 people suspected of plotting to attack the Israeli and American embassies in the capital Baku. Iran's Revolutionary Guards was reportedly behind the plan to attack Israeli and U.S. targets in the country, according to Azerbaijan's national security ministry.
Posted by joe levin at 6:11 AM