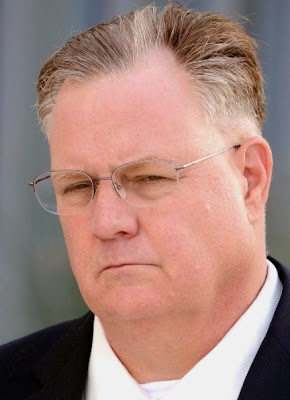 *Both investigated as part of homeowners association scandal

*Federal prosecutors plan to name up to 20 new defendants

A second prominent attorney targeted in a federal investigation of fraud and corruption at homeowners associations has turned up dead in less than a week, creating unease among cooperating witnesses.

Authorities do not suspect foul play in either case and are initially treating the deaths as suicides.

But one defense attorney said the deaths are generating a growing sense of anxiety among those named in the federal investigation, which alleges a massive scheme to take over homeowners association boards and then steer legal and construction contracts to specific firms.

"Some of the witnesses are extremely concerned about their well-being and safety," said the defense lawyer, who was involved in plea negotiations with the government. "People are dying here."

Amesbury, 57, who pleaded guilty and agreed to cooperate with federal prosecutors, was found dead Sunday night in Grass Valley, Calif. Sources said his brother, Thomas Amesbury, found the body hanging in a shed.

"There is no evidence of foul play or any suspicious circumstances; however, (the death is) still under investigation," Schmidt said.

Quon, 51, a major player in the scheme whom prosecutors were looking to indict, was found dead in the bathtub of her southeast valley condominium at The District on March 20.

The official causes of both deaths won't be known until toxicology reports are complete. Henderson police said foul play is not suspected in Quon's death.

'TOO MUCH OF A COINCIDENCE'

Two other people who attracted the interest of authorities in the sweeping federal investigation also have died under unusual circumstances.

Former Las Vegas police officer Christopher Van Cleef shot himself to death a few days after a September 2008 FBI raid in the investigation. A former Vistana homeowners association board member, identified as Robbi Castro, died in 2010 of a drug overdose.

"All of these deaths are just too much of a coincidence," said Wanda Murray, a former Vistana board member who helped expose corruption at the association. "None of them make sense to any of us."

Murray said she served on the Vistana board with Castro, who died in Carson City.

Amesbury's death prompted federal and local investigators in the homeowners association probe to travel to Northern California to visit the death scene.

Frank Cremen, David Amesbury's defense lawyer, said his client was in Grass Valley recovering from injuries he suffered last year in an assault in Henderson. Grass Valley is a small community northeast of Sacramento.

On Nov. 16, several weeks after he had pleaded guilty in the homeowners investigation, Amesbury was discovered badly beaten in a gated Henderson community.

Authorities said they did not find any evidence the assault was tied to the probe, and Henderson police closed the investigation in January.

"No further leads had been developed in the case, and the victim did not have a clear memory of the incident," Henderson police spokesman Keith Paul said Monday.

A source close to the investigation said Amesbury was transported to the hospital last November in bad shape.

"He was really beaten to a pulp," the source said. "He had two broken ribs, and both his kneecaps were shattered. He also had a variety of facial injuries."

A bloodied Amesbury was dressed only in his underwear and shoes when he was discovered lying in the street in the quiet neighborhood, according to Henderson police reports.

At one point, the reports said, Amesbury told a nurse he "was beaten up, and he deserved it." He also told a detective that he "planned to commit suicide or try to" and had brought 30 doses of Valium with him.

The police reports show detectives had a hard time pinning down Amesbury about what had happened to him.

Amesbury, who once co-owned the Courthouse Cafe at the Regional Justice Center, was the first lawyer to enter a felony plea in the far-reaching homeowners association investigation, which has targeted lawyers, judges and former police officers.

He was among 10 defendants who pleaded guilty and struck deals to cooperate with federal prosecutors looking to charge higher-level players in an alleged conspiracy to profit from the takeover of homeowners associations across the valley.

Justice Department lawyers from Washington, D.C., who are spearheading the investigation, are moving forward with the case despite the recent deaths.

They intend to name close to 20 new defendants soon in one charging document in federal court, the Las Vegas Review-Journal has reported.

A list viewed by the Review-Journal of those agreeing to plead guilty includes a lawyer, former homeowners association board members, straw buyers and community management employees.

Negotiations are continuing, and the list of defendants could grow before prosecutors are ready to file the group plea agreement in court. Former Las Vegas police officers also now are among those negotiating plea deals.

He admitted that between March and September 2008, he was paid a $3,000 kickback by his co-conspirators to help rig board elections at Chateau Nouveau and Pebble Creek. The scheme involved finding "straw purchasers" to buy condominiums and getting them to run for seats on the boards, prosecutors have alleged.

The straw buyers were elected through classic dirty campaign tactics that included forging ballots and digging up dirt on candidates not supported by the co-conspirators.

Amesbury also admitted that he participated in a separate scheme to defraud banks while seeking refinancing for the Courthouse Cafe, which he operated under a Clark County contract with former construction company boss Leon Benzer and another partner, former Las Vegas police Lt. Benjamin Kim.

Both Benzer and Kim are targets of the federal investigation but have not been charged.

All three partners ran the Courthouse Cafe until they had a falling out and turned over the restaurant rights with county approval to a Capriotti's Sandwich Shop chain.

Villegas, who filed for divorce in October, was fired from the district attorney's office earlier this month.

FBI agents and Las Vegas police suspect Villegas, who had been a prosecutor since May 1989, misled them about the extent of her knowledge of money loaned to the Courthouse Cafe, sources have said.

The scheme, which occurred from October 2008 through July 2009, involved striking a secret deal to let an unidentified businessman handle the daily operations of the cafe without informing the county or the banks, authorities alleged in documents in the case against Amesbury.
Posted by joe levin at 2:16 PM