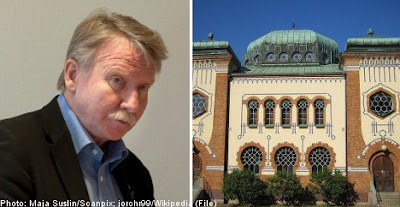 BERLIN – Ilmar Reepalu, the Swedish social democratic mayor of Malmö, said on Thursday in an NEO magazine interview that the Swedish Democratic party has infiltrated the town’s Jewish community to spread hate of Muslims.

Lena Posner Körösi, the chairwoman of the central Jewish council in Sweden and the Jewish community in Stockholm, termed Reepalu an “anti-Semite” in the Swedish Christian daily Världen idag because of his hate directed at Jews.

Reepalu said in the NEO interview that there are “strong ties” between Malmö’s Jews and the Sweden Democrats, an anti-immigration party. The mayor noted that the party had “infiltrated” the Jewish community.

The Jewish community sent a letter of protest to the social democratic party leader Stefan Löfven, noting that the community “has long had to endure hatred and threats just because we are Jews...

Ilmar Reepalu has now crossed all boundaries... This type of conspiracy theories, we know all too well from history.” The letter continues that “Ilmar Reepalu no longer has any credibility for us Jews in Sweden.”

According to the letter, many Jewish members of congregations who are active with the social democrats “are no longer fully able to support a party that has a representative whose rhetoric is clearly anti-Semitic.”

Speaking from Tel Aviv on Saturday, Sara Radomski, who is from Malmö and moved to Israel seven years ago, told The Jerusalem Post on the phone that the mayor’s remarks are not unexpected.

“This has been going on for years and it does not come as a surprise even though it still is a disappointment,” said Radomski, the co-manager of the website Sweden Israel and the Jews, which monitors anti-Israel hate and anti-Semitism in Sweden.

Radomski added that “the little trust the Jewish community had in Reepalu is now most likely shattered. The latest statement by the mayor is just one in a row and further part of an unacceptable trend.”

Rabbi Abraham Cooper, associate dean of the Simon Wiesenthal Center, told the Post on Friday that the mayor’s statements “are beneath contempt and only further increase the sense of isolation and abandonment of the Jewish community. Just who exactly is this bully pandering to with such posturing?” “Isn’t there enough mistrust and lack of understanding than to inject such a canard?” the rabbi continued. “How does he expect the Jews of Malmo to feel this Passover after the murders in Toulouse of a rabbi and his small children. One can only hope that members of his own party will denounce his disgraceful and dangerous rhetoric.”

In 2010, a group of Swedish Muslims in Malmö, a city of 290,000 now constituted approximately 20 percent by Muslim immigrants, shouted “Sieg Heil” and “Hitler, Hitler” and threw rocks and bottles at a small group of Jews who were peacefully demonstrating in support of Israel. Reepalu said at the time that Sweden’s Jews were largely culpable for the violence inflicted on them because they didn’t “distance” themselves from Israel and the IDF operation during the Gaza war.

“The community chose to hold a pro-Israel demonstration,” he added.
Posted by joe levin at 9:49 PM