Abbie and her husband Dan pictured on their wedding day. He divorced her in 2007 because he did not believe she would ever recover 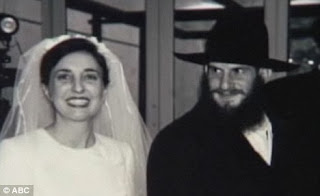 She is the mother of three happy, healthy triplets whose smiling photos line the walls of her room in South Carolina.

But Abbie Dorn, 34, has held her children only twice in the four years since she sustained terrible brain damage giving birth to the triplets - because her ex-husband refuses to let her see them.

Dan Dorn, who cares for the children 2,500 miles away in California, says it would traumatise them to visit their quadriplegic mother, who cannot speak, eat or move.

But Mrs Dorn's parents say her condition doesn't mean she loves the children any less, and have fought an acrimonious legal battle to win visitation rights for their daughter. 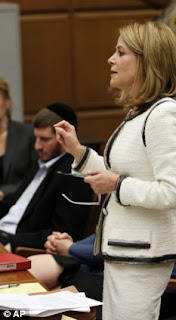 A judge at the Los Angeles Superior Court will make a decision after listening to the closing arguments from both sides today in an acrimonious hearing, in which her parents, Susan and Paul Cohen, argued their daughter has a constitutional right to motherhood.

They say she expresses her emotions by smiling and crying, and can blink to communicate, with one long blink representing a yes.

Last year an ABC reporter asked her if she wanted to see her children. She responded a long, firm blink.

But Mr Dorn insists his ex-wife is '100 per cent not there' and says he does not want to be 'forced to do anything by the court for a woman in a vegetative state', the Los Angeles Times reports. 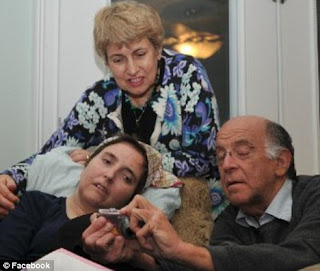 During the hearing, he revealed he had not told his children anything about their mother until they were four, and admitted he did little to prepare them for their first meeting with her in December.

The judge's verdict will only be temporary, with a full trial on the Cohens' parental rights lawsuit expected to be brought at a later date.

The heartbreaking events which led to the Californian courtroom began in June 2006, when she gave birth to the triplets, Reuvi, Yossi and their sister Esti.

She and her husband, both Orthodox Jews, had struggled to conceive and turned to IVF to grant Mrs Dorn her dream of having children.

She had the first two babies without incident, but as the doctor was delivering Yossi, he accidentally nicked her womb.

Mrs Dorn began bleeding internally, her heart stopped, the defibrillator they used went wrong and her brain was deprived of oxygen for so long she was left paralysed.

She could no longer speak or move, and required round-the-clock care. She later received a malpractice settlement of almost $8million.

For the first year, she was treated at a hospital in California, and her husband visited 'all the time', according to Mr and Mrs Cohen.

But after 12 months, Mr Dorn began to believe his wife would never recover. He announced was divorcing her in 2007, on their children's first birthday, saying he was 'faced with the necessity of beginning to rebuild his life'.

Mr and Mrs Cohen took their daughter back to the family home in Myrtle Beach, South Carolina, to care for her, while the children remained with Mr Dorn in Los Angeles.

Happiness: Abbie Dawn pictured as a teenager. Her parents say she should be allowed to see her children grow up

According to her parents, the visit went well and the children were not afraid of their mother, despite her feeding tube and hospital bed.

Mrs Cohen said: 'They were very very affectionate and loving. They called her Mommy.'
Mr Dorn disagreed. Although he admitted the children said they enjoyed seeing their mother, he claimed Reuvi began wetting the bed and he and his sister became clingy, the Los Angeles Times reports.

But in his testimony he also said he had done little to prepare them, telling the children their mother would not be aware of their presence, and had not spoken to their doctor afterwards to help them to cope.

According to the Los Angeles Times he told the court: 'I'm here today because of Susan. [ Her actions have] been a constant: trying to ruin my reputation, bankrupt me and take my children.'

But Mrs Cohen said: 'Their mother does love them. She loves them very much. I don't want these children to ever, ever believe they were abandoned...

'Our home is always open. We would never throw a child away.'

A Los Angeles County Superior Court judge ruled Friday that a paraplegic woman who communicates by blinking has the right to see her 4-year-old triplets.

In a tentative 10-page ruling, Judge Frederick C. Shaller said that Abbie Dorn, 34, can see her daughter, Esti, and sons Reuvi and Yossi, for a five-day visit each year pending a trial in the acrimonious custody case. She also entitled to a monthly online Skype visit. A trial date has yet to be set.

“We are thrilled,” said Felicia Meyers, one of Dorn’s attorneys.

Dorn was healthy until June 20, 2006, when she gave birth to the children at Cedars-Sinai Medical Center. During delivery, a string of medical errors starved her brain of oxygen, and she is in a minimally conscious state, according to the neurologist who examined her during legal proceedings.

Abbie and Dan Dorn have since divorced. He has custody of the children and is raising them in the Los Angeles area. Dorn lives with her parents in Myrtle Beach, S.C. Her parents are also her conservators and sued Dan on her behalf, asking the court to order him to bring the children for regular visits. 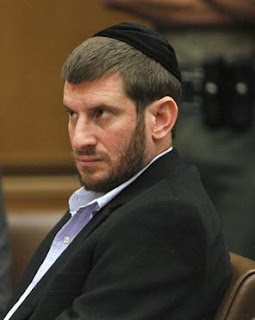