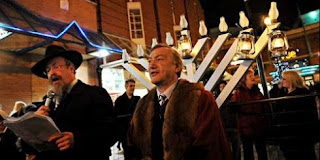 [Note: “US” in the article is United Synagogue, the British Orthodox synagogue umbrella group. “JC” is the Jewish Chronicle.]

A judge has expressed his "serious concerns" about the motives of the United Synagogue after the rabbi of Britain's largest Orthodox synagogue turned to the High Court to block what he believed is an attempt to oust him.

Rabbi Mendel Lew, of Stanmore and Canons Park Synagogue, was granted an interim injunction in London on Wednesday to stop the US taking any disciplinary action against him, pending a full court hearing this summer.

In a separate development, the JC has learned that another rabbi, Ariel Abel, who left Radlett Synagogue last summer, has filed a claim of unfair dismissal against the US.

The executive of the Rabbinical Council of the United Synagogue said that the US needed to work "with rabbis, not against them".

But a US spokesman dismissed the idea that the two cases indicated a wider problem of employment conditions within the rabbinate: "There are 1,400 people employed in the United Synagogue, and any matters like these are rare".

Daphne Romney, QC, acting for Rabbi Lew, who has been senior rabbi of Stanmore since 2006, told the court that he had faced a "trumped-up procedure" which he thought was designed to engineer his departure. He had been put in a Kafka-like situation, she said.

Last December, what she called a "ridiculously flimsy" allegation of breach of confidence against Rabbi Lew was thrown out at a US disciplinary hearing.

But the following day Rabbi Lew was notified that he would have to attend a meeting in February to discuss issues about his performance, including alleged failure to visit congregants or answer emails.

After that meeting, he received a letter saying that he would have to go to a further meeting in March to review his ability to do his job under the United Synagogue's "capability procedure". It warned him that failure to improve could lead to dismissal.

The US admitted that it had not put in place a capability procedure until Rabbi Lew's situation arose.

Suzanne McKie, counsel for the US, said that the US was "not gunning" for Rabbi Lew, and that the capability review was a "softer" option than a disciplinary process.

The US, she said, was trying "to do what was best" in the circumstances.

But Judge Graham Robinson, granting the request for an injunction, said that the proposed capability procedure had raised "serious concerns" about the motives of the US.

Rabbi Lew said after the hearing: "I am delighted to be able to continue to serve the community I love and the members who have trust and confidence in me."

His solicitor declined to say who had funded his legal action.

Philip Hertz, chairman of Stanmore, which has close to 3,000 members, said: "It was never our intention to dismiss the rabbi. The aim now must be to restore shalom bayit [harmony] to the community."

The US spokesman commented: "It is very sad that the matter found its way into the High Court. There are internal procedures and, of course, there is always recourse to a Beth Din."

In its statement, the RCUS executive said that it had "supported Rabbi Lew every step of the way, as we have supported other rabbis in similar circumstances. We are delighted that our colleague has been vindicated."

The US rabbis' representatives said: "It is sad that this issue should have come before a court of law in the first place and we certainly hope that something like this should not be repeated in the future. This judgement should send out a clear message that the United Synagogue must learn how to resolve difficult issues by working with their rabbis and not against them. We remain committed to supporting and vigorously defending our colleagues' rights and reputations."

Boxing promoter Robert Waterman, a longstanding member of Stanmore, said he was "incredibly upset" to hear of the court case because "Rabbi Lew is a very good communal rabbi. There is a groundswell of support for him. I feel it hard to understand the United Synagogue's behaviour."

A pre-review hearing of Rabbi Abel's claim is scheduled to take place at a tribunal next month.
Posted by joe levin at 12:24 PM