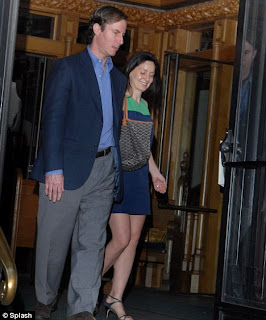 The son of disgraced Wall Street swindler Bernie Madoff is running a company helping people cope in the wake of a disaster.

And Andrew Madoff certainly should know what he is talking about.

The jailed tycoon’s youngest son saw his family name dragged through the mud after the mammoth scale of his father’s multi-billion dollar Ponzi scheme was exposed.

With his older brother, Mark, he worked for his disgraced father’s investment firm.

But unlike Mark – who killed himself in December on the second anniversary of their father’s arrest – Andrew is rebuilding his shattered life.

And now he is working with fiancée Catherine Hooper in a company helping clients handle all sorts of emergencies from terrorist attacks to natural phenomenon like earthquakes and tsunamis.

The firm, Black Umbrella, has tripled its business since disaster struck in Japan on March 11.

Catherine Hooper is president and Madoff is director of operations for the New York-based company that puts together high-end crisis management packages for all manner of disasters.

Families with young children, in particular, have bought the packages, priced between $750 and $2,000, following the devastating events in Japan.

‘I think that a lot of people had this item on their to-do list for a long time, When you see a terrible tragedy like this, this is what pushes them to face their anxiety about thinking through this strategy and start making that plan,’ Hooper told ABC News

She refused to discuss her connection to one of the country’s most infamous families, saying only: ‘Every family has ups and downs. My thinking on this is, I think, the same as everybody's.

Before his brother committed suicide in his Manhattan apartment, Andrew said in an interview: ‘I think that what happened to me illustrated to me how important it is to be prepared for unexpected events. I'm just another example

Hooper said she was inspired to launch her company after seeing how unprepared victims were to handle the chaos caused by Hurricane Katrina.

‘This is something most families can do by themselves. I'm delighted if they want to hire me, but I think that it's something everyone should do, regardless if they have professional help or not.

‘Parts of this process help with disasters that are much more personal than a fire or a flood,’ she added.

The survival kits include a consultation session with a planning expert who helps map out escape routes and contact plans, plus a ‘go bag’ with necessities, such as eye goggles, a first aid box, a radio and aluminium contact cards.

‘I like to think of it as something a family takes on when they feel as though it's something they really need, not necessarily something that they want.

‘Personal trainers aren't cheap either, but people hire them when they absolutely can't make it happen for themselves,’ Hooper told ABC.
Posted by joe levin at 7:16 PM

Email ThisBlogThis!Share to TwitterShare to FacebookShare to Pinterest
Labels: ABC