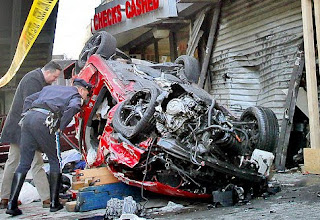 A car coming off the Ed Koch Queensboro Bridge jumped a curb and killed a 68-year-old man in Queens early Monday, cops said.

The victim, whose name was not immediately released, was on the sidewalk in front of the Villa de Beaute hair salon in Long Island City about 4 a.m. when the car veered from the off-ramp and struck him, cops said.

He died at the scene.

"It was a horror movie - pools of blood running onto the street," said carpenter Yama Dastagirzada, 41, of Far Rockaway, who was the first person to come upon the wreck.

Cops said the 35-year-old driver lost an arm and was taken to Bellevue Hospital. A 31-year-old female passenger was taken to Cornell Weill Medical Center. Both were in stable condition and expected to live.

A police source said investigators took a sample of the driver's blood to check for alcohol, but the cause of the accident was unclear.

The car - a red four-door 2007 Volkswagen - slammed into the beauty parlor and the neighboring Espinal's Caribbean Restaurant II before coming to rest in the shadow of Silvercup Studios.

"I saw one man face down in the sidewalk. He was wearing all black. He wasn't moving," Dastagirzada said.

He then noticed the man was covered in blood and called 911. Dastagirzada then turned his attention to the passengers in the crushed car.

"I looked in and saw a hand moving," he said.

"I was going to try and turn off the ignition but the car was crushed from the top. I couldn't get in," he said. "The whole front end of the car was taken off."

"I stuck my head in there and asked him, 'Can you hear me?' There was no response. I told him an ambulance was coming and 'Just hang on.'"

The crash caused heavy damage to the two hair salon and restaurant. Salon owner Jiwani Akber said he didn't now when he would be able to reopen.

"Everything is destroyed," he said. "Everything I had was put into this shop."

"I'm glad it didn't happened during the daytime," he added. "It could have been worse."

Kathy Anderson, who owns a check cashing business along the same row of shops said it was not the first time a car had gone up onto the sidewalk after coming down the off-ramp.

"My store's been hit a few times," she said. "But this car must have been going really fast to do this kind of damage."
Posted by joe levin at 4:27 PM