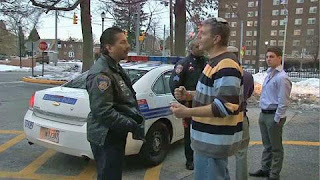 The city of Baltimore, in the eastern United States, is known as "a city of neighborhoods." It's the 21st largest city in the U.S. and has 225 different neighborhoods.

Some 100,000 Jews live in the city. One of its oldest neighborhoods, Park Heights, has a substantial Jewish population. To provide support and a sense of security to its residents, the Baltimore police department has a special Jewish Liaison.

It's late Friday afternoon, just hours before the beginning of the Jewish Sabbath. Baltimore Police Jewish Liaison Ken Dickstein is patrolling the Park Heights neighborhood. Jews there are headed to synagogue.

Most are Orthodox Jews and strictly follow Jewish law. That means they're not allowed to drive on the Sabbath. Dickstein is making sure they are safe.

"Their Sabbath starts on Friday sundown until Saturday sundown, so there’s a lot of pedestrian traffic," said Dickstein.

Although there's little crime, there is concern that people could get mugged. Police officer James Vega also patrols the neighborhood as Sabbath services end. "Sometimes it is late at night - 9, 10, 11 o’clock at night."

Baltimore has a sizable Orthodox Jewish community. It's close-knit and even has its own social services, including ambulances. Neil Schachter heads the local citizens patrol. He says Dickstein, the first liaison to the Jewish community, helps residents feel more secure.

Dickstein grew up in a Jewish neighborhood in Baltimore and speaks Hebrew and Yiddish, a blend of German and Hebrew once commonly spoken by East European Jews. His father was a rabbi. Here at this Jewish Community Center, he chats with Jewish Americans who are visiting Baltimore.

Baltimore’s Jewish community dates back to the late 1700s. Park Heights has 55 synagogues. One of the newest was built by Iranian Jews.

"There are quite a few Iranians who live within the community. They own quite a few of the businesses and the kosher restaurants and bakeries."

This donut chain is popular in the United States. But what makes this one in Park Heights different is it's kosher, meaning the food has been prepared according to Jewish dietary law. Dickstein says it's the only kosher donut shop in Baltimore.

"There is a sign right behind me that shows that it is under strict supervision by the rabbi that oversees all the kosher food that is laid out here," said Dickstein.

Besides keeping people safe in their homes and businesses, Dickstein said the best part of his job is feeling a close connection to the Jewish community.
Posted by joe levin at 6:59 AM