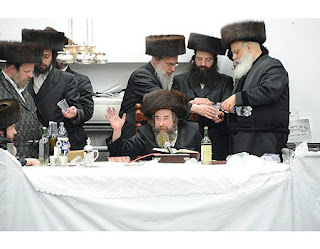 Rabbi David Twersky, leader of the Rachmastrivka Hasidic dynasty, says the recent tsunami in Japan, which has left thousands of people dead, was the result of the arrest of two yeshiva students by Japanese authorities after being convicted of smuggling drugs.

"The Japanese don’t understand why they keep on receiving blow after blow, and it never ends. If they want it to stop, they must release the two guys jailed in their prison immediately, and then experience salvation," the rabbi told his followers last week during a Purim celebration in Jerusalem.

Haredi website Ladaat reported that the Rebbe asked for the names of the two jailed men and said a prayer for their immediate release. "Amen," the audience responded.
The yeshiva students were arrested in an airport in Japan in April 2008, in possession of a suitcase with some 90,000 Ecstasy tablets.

The detainees' lawyers claimed at the time that the young men were victims of a 'sting' and were tempted with money, but the two were convicted the following year.

One of the detainees, a minor, was sentenced to eight years in prison, and Israel submitted a request to have him transferred back to the country.

The Rachmastrivka Hasidic dynasty is one of the biggest and most famous Hasidisms, with thousands of followers and many affiliates. It has two centers – one in Jerusalem and one in Borough Park, New York.

Ahead of the Hasidic celebration last week, huge screens were placed near the Torah study house in Jerusalem, and the tish was broadcast live due to the density inside the building.
Posted by joe levin at 6:36 AM