Report: Abducted Gazan may have info on Shalit 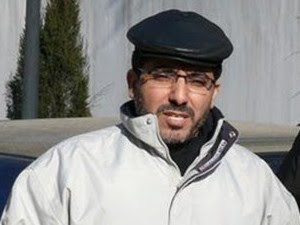 But Abu-Sisi's attorney, Smadar Ben-Natan, rejected the report Wednesday, claiming her client had no information on the IDF soldier.

The report says that the senior power plant official, who disappeared from the Ukraine and later surfaced at an Israeli prison, was actually kidnapped by Kiev intelligence agents at the Jewish state's behest.

"He has no information on Gilad Shalit. He was not involved in it in any way, and if Israel thought he had such information when it abducted him then it made a serious mistake, and it's time the state admitted that mistake and allowed him to return to Ukraine," Ben-Natan told Army Radio.

The attorney added that Shalit's name had never come up in court hearings on the remand of Abu-Sisi's arrest.

Entitled 'The Long Arm of the Mossad', the report recounts Abu Sisi's abduction during the night between February 18-19 as he was making his way by train to Kiev.

Abu Sisi and his wife, who is Ukrainian, were in the country in order to secure citizenship papers for the family, who wanted to leave the Gaza Strip. The report adds that Abu Sisi was planning to meet with his brother, who has been residing in Amsterdam.

Der Spiegel's report says two train employees saw two men dressed in civilian clothing board Abu Sisi's car at around 1 am, and escort him out. The men had told police what they saw during questioning, but later retracted their statements, the report adds.

The explanation to this, according to the German paper, may be that the two were persuaded to do so by Ukrainian intelligence, which kidnapped the engineer at Israel's demand. The claim was made despite the Ukrainian foreign ministry's denial of involvement.

"If the Mossad carries out such an operation and interrogates the man for six weeks he must know something Israel really wants to hear," an unnamed source told the paper. The source added that had Abu Sisi been merely a problematic figure, Israel would have killed him.

His wife, Veronika, was afraid he had been killed, Der Spiegel's report says, but after hearing he was being kept jailed in Ashkelon she left their six children with her mother in law and fled through a smuggling tunnel to Egypt, and from there to Ukraine. In an interview with a local paper she denied Abu Sisi had any connection to Hamas.
Posted by joe levin at 4:36 AM