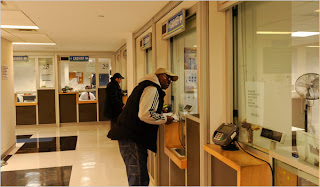 Abu Kamara sat across a desk from the hearing officer with hundreds of dollars of cash in his pocket, four unpaid tickets from two cars and a list of excuses.

After more than an hour in the Ping-Pong queue of Manhattan’s parking violations court, bouncing from Window 21 to Window 11 back to Window 21 again, he had won entry to the hearing room, where an administrative law judge sat behind a bare L-shaped desk, minutes from issuing a decision that could make life a lot harder for Mr. Kamara.

“I’ll take your paperwork and your driver’s license,” said the judge, Michael Maceira. “How many tickets are you contesting?”

The city issues nearly 10 million parking tickets each year, and about 1.2 million are contested in hearings.

This week, the city announced that it would allow people to challenge tickets online, by submitting written rebuttals and uploading supporting materials for the judge to consider. The idea is to speed up the process and to make it “more customer-service oriented,” Christine C. Quinn, the City Council speaker, said proudly on Monday.

Left unsaid, but surely not unthought, was the prospect of avoiding a trip to the parking violations court, one of the more dreary experiences New York City has to offer.

Mr. Kamara, 58, arrived at 9:15 a.m. Tuesday to the court, on the second floor of 66 John Street, which also contains hearing rooms for the Environmental Control Board (10th floor) and the Consumer Affairs and Health Departments (11th).

He works as a subway conductor for the Metropolitan Transportation Authority, often beginning work early in the morning and finishing too late in the afternoon to make it to court. His delay led to a judgment against him, and a marshal towed one of his cars, days before a scheduled vacation to Sierra Leone, where he is from.

“I’m trying to get a hearing to see if I can get some dismissed and pay what I have to pay,” he said. He could not afford to miss his flight, and he wanted to retrieve his car before he left so the storage fees would not accumulate.

He had his defenses ready. For parking in a no-standing zone: he was offloading groceries on Thanksgiving Day. For the expired meter: he had placed a receipt on his dash, but the parking attendant did not bother to walk around the mound of snow to see it.

In the court’s waiting room, there were others just like him, some calm and composed, others angry. Above the low rumble of the escalator, the rhythmic calls of the woman behind the reception desk (“Next!”) and the computerized voice calling out ticket numbers, the sound of people raising their voices took on something of a choral pattern.

At Window 13, a man squatted on his heels close to the floor, so he could look directly at the teller through the opening for passing documents.

“I came on a bus from L.A. to take care of this,” said the man, Sanders Hicks, 40, raising his voice and pointing his finger. “You are torturing the public.” His 1998 Mercury Grand Marquis had been towed and auctioned off for $325, which did not cover the $1,274 he had in parking tickets on that car and a van he owned. So his van was also seized, but it had not been auctioned yet.

He said that his Fourth Amendment rights — against unreasonable search and seizure, that is — had been violated and that he was going to sue in small-claims court. “I’m not going to mess with this Kafkaesque system,” he said. “I’m an American!”

When Mr. Kamara made it to his hearing room, he presented his license and his documents and began explaining why the tickets should not have been written, but the administrative law judge politely cut him off. Judgments had already been issued on two of the four tickets because he had waited so long. “I can’t do anything for the penalties unless you have a reason for failing to respond in a timely manner,” Judge Maceira said.

“I have had problems with the family,” Mr. Kamara said. “I bought a house. I borrowed money from my retirement. They foreclosed my home. They took my daughter’s scholarship.” Tears welled in his eyes and his lips quivered.

“I couldn’t come to defend myself at that time, and at this time I am looking for a place to accommodate my family.”

Anything else, Sir? Silence, broken only by the sound of the judge typing.

Judge Maceira presented him with a copy of the decision. He dismissed one ticket and reduced the fine on another.

Two hours after his arrival, Mr. Kamara returned to the lobby, cash in hand, ready to pay the fines and prepare for his trip. But when he got to Window 21, the teller told him that his car insurance had expired, and that she could not release his car from the towing company. He would have to go to the Department of Motor Vehicles to show proof of insurance. And then return to the court.
Posted by joe levin at 6:38 AM