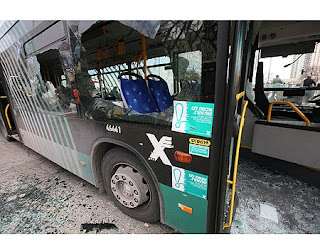 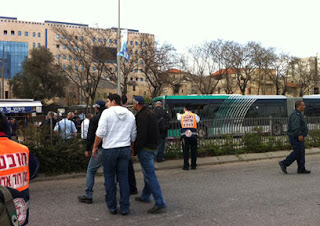 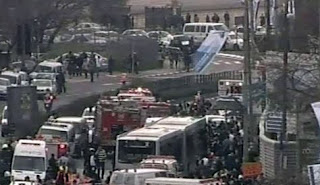 Blast caused by explosive device, not suicide bomber; four people seriously hurt; entrance to the city has been closed, and ambulances and police forces were arriving at the scene.

An bomb exploded Wednesday at a crowded bus stop outside the International Convention Center in Jerusalem, just opposite the central bus station. At least 25 people were wounded in the incident, four of them seriously.

All of the casualties have been evacuated to the Hadassah Hospital in Ein Karem. The Magen David Adom emergency services said that there were no fatalities.

The blast could be heard throughout Jerusalem and blew out the windows of two crowded buses, No. 74 and No. 14. The explosive device was apparently tied to a telephone pole.

An eyewitness in the area at the time of the explosion told Haaretz that she heard a loud blast close to the central bus station and second later sirens began to wail and security forces rushed to the scene.

Meir Hagid, one of the bus drivers, said he heard a loud explosion as he drove by the site, located near the main entrance to Jerusalem and its central bus station.

"I heard the explosion in the bus stop," he said. He halted his vehicle and people got off. He said nobody in his bus was hurt.

The entrance to the city has been closed. Security forces were combing the area for other suspicious packages or objects.

A Channel 2 reporter said that the Palestinian Red Crescent contacted the emergency services to offer assistance in evacuating the wounded.

The bombing occurred just hours after Gaza militants fired two Grad-type Katyusha rocket at the southern city of Be'er Sheva and a barrage of mortar shells on the western Negev.

Prime Minister Benjamin Netanyahu canceled his scheduled trip to Moscow in the wake of the Jerusalem bombing.

Jerusalem has been hit by a number of terror attacks over the last few years, two of them involving tractor drivers that ploughed down a central street.

In the first incident in July 2008, a bulldozer driver hit a bus, pedestrian and cars before he was neutralized by a soldier and civilian who mounted his vehicle and overtook him and then shot and killed him.

The second attack took place three weeks later. Twenty-four people were injured in the attack, one of which moderately to critically wounded. The terrorist hit five cars before he was shot by a civilian and an IDF military border guard officer that were at the scene of the attack.

Three months later, 19 people were injured - two of them critically and four moderately -when an East Jerusalem resident veered off the street onto the sidewalk near the Old City of Jerusalem and crashed into pedestrians. Most of the pedestrians were soldiers. An officer among the group open fire and killed the terrorist.

The capital suffered dozens of suicide bombings that targeted buses and restaurants during the second Palestinian uprising last decade. Jerusalem last experienced a suicide bombing in 2004.