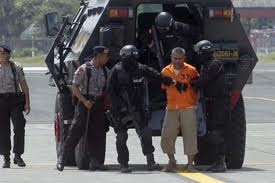 TORONTO— Police arrested a man at Toronto's Pearson airport who they said was planning to travel to Somalia to join an al Qaeda-linked Islamist group.

Royal Canadian Mounted Police spokesman Sgt. Marc LaPorte said Wednesday the man was arrested as he was about to board a plane Tuesday night. Sgt. LaPorte said the man was planning to join al-Shabaab, and he has been charged with attempting to participate in terrorist activities.

Sgt. LaPorte said several Somalian youths from the Toronto area are suspected to have traveled to Somalia to join al-Shabaab. This is the first arrest in Canada.

The U.S. government charged 14 people last year with being participants in "a deadly pipeline" to Somalia that routed money and fighters from the U.S. to the militant group al-Shabaab. Of the 14 charged, 10 are people from Minnesota who allegedly left to join al-Shabaab. The FBI has said al-Shabaab tries to radicalize and recruit U.S. citizens and others to train and fight with them.

Roughly 20 men from the U.S.—all but one were of Somali descent—left Minnesota from December 2007 through October 2009 to join al-Shabaab, officials have said.

Police said the suspect in Toronto was arrested without incident as he was about to board a plane bound for Cairo, transiting through London, to then go to Somalia.

The man has a court hearing scheduled for Wednesday. His name hasn't been released pending the hearing.
Posted by joe levin at 5:36 PM