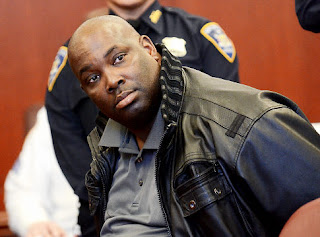 A city cop was charged with with attempted burglary and conspiracy Tuesday for an alleged plot to swipe nearly $1 million from a convicted drug dealer's former apartment.

Shawn Jenkins, 43, faces up to seven years in prison if convicted of conspiring to raid the Inwood pad with a police informant in May 2009.

Jenkins - who was being secretly taped - plotted to invade the home with a fake warrant, Taser guns and cuffs to immobilize the current tenant, court documents show.

Jenkins told the informant he had once worked as a bodyguard for deported Dominican dealer Eugenio Perez and that Perez made him a map showing $900,000 hidden under the floorboards of the apartment.

When he went to carry out the burglary, the feds moved in, officials said.

The case was referred to Manhattan District Attorney Cyrus Vance's office last year after it was determined no federal crime was committed
Posted by joe levin at 11:49 AM