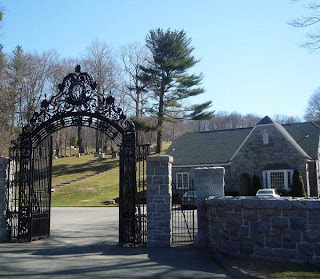 The accusations against board members include $3 million in unpaid loans, no-show jobs and credit-card charges unrelated to cemetery business.

"The controlling certificate holders, directors and officers of Mount Eden have managed and operated Mount Eden for their personal benefit and personal gain," wrote New York State Cemetery Board Chairman Daniel Shapiro in an order he signed and forwarded to the attorney general. The board oversees the state's nonprofit cemeteries.

O'Connell and Ruth Hogan both receive $75,000 annual salaries for 30 hours of weekly work, but the order alleges they are rarely at the cemetery and says Hogan is living in North Carolina. Neither O'Connell nor Ruth Hogan was available for comment at Mount Eden on Monday morning and they did not return messages seeking comment.

A spokesman said the Attorney General's Office would not comment on a continuing investigation.

Department of State spokeswoman Lisa MacSpadden wrote in an email Monday that the Cemetery Board discovered the alleged misconduct through a routine audit. MacSpadden explained that if the attorney general could wrest control of Mount Eden from its current directors, Mount Eden's lot owners would be asked to select a new board.

The 26-acre Jewish cemetery at 20 Commerce St. has about 16 unsold acres and averages 72 burials a year, according to the state.

The Cemetery Board, which regulates nonprofit cemeteries, referred its order to the attorney general for action on April 27, 2010, but the matter did not become public until last week, when Mount Eden published a public notice for its annual members meeting, scheduled for 11 a.m. April 11 in the offices of Wolf Haldenstein Adler Freeman & Herz in Manhattan. The public notice stated that as of Feb. 20, Mount Eden had spent $115,000 on legal fees in connection with the attorney general's investigation.

The Cemetery Board sent a copy of its order to The Journal News after a reporter inquired about the attorney general's review. According to that document, O'Connell, Ruth Hogan and their relatives got control over Mount Eden's board because O'Connell's father, James O'Connell, purchased certificates issued by the cemetery in 1936, when it was incorporated. The voting rights associated with the certificate ownership gave the O'Connells a majority of votes because individual plot owners never attended annual meetings.

The certificates, a type of loan, were supposed to be repaid using 50 percent of gross proceeds from land sales. The Cemetery Board said that since Mount Eden never paid any interest or principal on the certificates and the owners never attempted to collect on them, they should be invalidated.

The order also says that all current Mount Eden board members were improperly elected and have no authority to conduct cemetery business.

Beth El Synagogue Center in New Rochelle owns a large plot for its members at Mount Eden dating back decades. On Monday, Rabbi Melvin Sirner said he was unaware of misconduct allegations against Mount Eden's directors.

"From my finite experience, it seems to be well- kept," Sirner said of the grounds.
Amy Tietz has a family plot at Mount Eden that was bought by her grandparents and she pays an annual grounds maintenance fee for it.

Tietz, a New Rochelle resident, echoed Sirner's appraisal of the cemetery's upkeep.
"I'm assuming that whatever assets they are allegedly taking are not affecting any people who are already buried," Tietz said.
Posted by joe levin at 5:00 PM

Email ThisBlogThis!Share to TwitterShare to FacebookShare to Pinterest
Labels: lohud.com