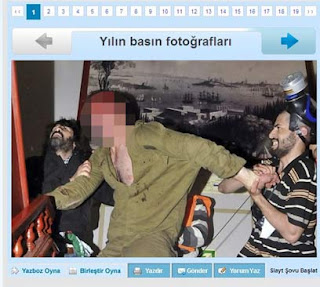 Photojournalism award, Turkish-style: The picture of a bleeding IDF soldier aboard the Marmara won Turkey's 2010 Photo of the Year Award in the News category; the contest was held by the Turkish photojournalism association.

Nine people were killed onboard the Gaza-bound Turkish ship after IDF troops who raided it encountered violent resistance by "peace activists" armed with an assortment of weapons.

One of Turkey's largest websites, Milliyet, used the difficult image to create a puzzle for its readers.

The photograph shows a beaten up IDF soldier with his face and head bloodied while three Marmara passengers grab him and twisting his arm. The picture was shot by a Turkish photographer who hid copies in a hidden pocket and managed to smuggle them out of Israel.

Turkish media outlets did not blur the blood stains or the Israeli soldier's face.

The winning pictures were chosen out of 1,632 photos in six different categories. Prizes were handed out in the beginning of the month with Turkey's parliament speaker, deputy prime minister and various parliamentarians among those in attendance.

Israel's Navy commandoes raided and took over the Marmara on May 31 of last year after it attempted to breach the blockade imposed on the Gaza Strip. Among its passengers, the vessel carried members of the IHH terror group who ambushed the soldiers. Several troops were assaulted and abducted into the ship. The unexpected violence forced commandoes to resort to live fire, killing nine passengers.

About a week after the incident, the Turkish media published photos of bleeding and beaten up IDF troops.
Posted by joe levin at 7:22 AM