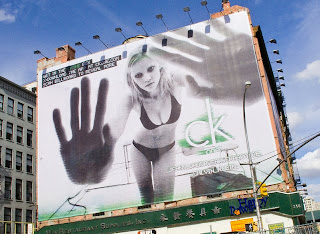 NEW YORK (CBSNewYork) — Calvin Klein is pushing the line again with one of its ads. Or maybe it isn’t.

The latest Calvin Klein billboard drawing attention from pedestrians — especially men – in the intersection of East Houston and Lafayette streets in lower Manhattan seems, to some, to include a certain sexually suggestive word.

Which word, you ask?

Well, as Ralphie put it in ‘A Christmas Story,’ it’s “THE word, the big one, the queen mother of dirty words, the F-dash-dash-dash word.”

But it’s not that simple.

The “F” word, if it’s there at all, isn’t spelled out in block letters. Not completely.

It starts with a small table in the background that’s partially blocked out by one of Calvin Klein’s typical thin and attractive young models. The table’s left leg, table top and support bar seem to form the letter F.

The model’s bikini briefs, which may have been strategically placed just to the right of the F, could be seen as a U.

Then there’s the C and K from Calvin Klein’s “CK One” logo.