Francesco Zaffuto 19, was slapped with a 104-count indictment 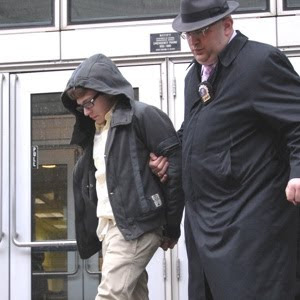 A creepy counselor who used his mother’s iPhone to take "trophy photos" of an 8-year-old autistic boy he allegedly assaulted at a Catholic-run Staten Island day camp came to court today bizarrely clutching "The Complete Works of Lewis Carroll" – a collection by the child nudity-loving author of "Alice in Wonderland."

Francesco Zaffuto, 19, turned himself into the District Attorney’s office this morning and was hit with an 104-count indictment, including four counts of sexual abuse, three counts of performing a criminal sex act, endangering the welfare of a child and 48 counts each of promoting and possessing the sexual performance of a child.

Prosecutors said Zaffuto used his mother’s iPhone to snap images of an assault on the boy at the Mission of the Immaculate Virgin at Mount Loretto summer camp in Pleasant Plains in late August 2008.

In some photos, the victim can be seen wearing clothing with the logo of the camp, which is affiliated with the Archdiocese of New York.

Prosecutors said he did not turn off the phone’s GeoTag feature, which allowed authoritiess to trace exactly where and when the photos were taken.

Parents were enraged that anyone would prey on kids who in many cases could not speak about being assaulted.

"I’ve lost sleep over this. I can’t imagine a child not being able to ask for help," said Barbara D'Amora, 45, parent of an 11-year-old camper who was not a victim. "We teach them to adapt to the community and they were betrayed by the community. "

Sources said Zaffuto, then a student at St. Josephs-by-the-Sea High School, was recommended for the counselor job by a priest who was one of his teachers.

Investigators then seized his computer and discovered the images he took of the assault on the boy.

Carroll, a 19th-century English author and photographer, has been a controversial literary fiigure because of his odd obsession with naked children in his illustrations and photographs. Scholars are divided over whether Carroll was in fact a pedophile himself.
Posted by joe levin at 3:12 PM