The Rev. Al Sharpton joins black demonstrators marching in protest after days of rioting in Crown Heights in 1991 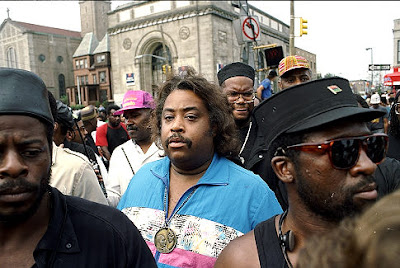 Twenty years after the Crown Heights riots, the city has grown, and I believe I have grown. I'd like to share a few of my reflections about the choices I made, including the mistakes, with an eye toward advancing racial understanding and harmony.

On the day of Aug. 20, 1991, I received a call from Carmel Cato -- who told me that he would like my assistance in dealing with the fact that his 7-year-old son had been killed in a car accident the night before in Crown Heights. His son's death had sparked violence throughout that night, with people angry and responding to what they felt was an insensitivity at best, an injustice at worst.

When I arrived in the neighborhood late in the evening the day after, I could see brick-throwing on all sides. I was living in New Jersey at the time, and though I knew Crown Heights fairly well, I did not know of the events of the first night and second day. I did not know Yankel Rosenbaum had been killed by a mob on that first night. I did not know the full volatility of the situation.

That began to change when I entered Carmel Cato's house late in the evening of the second night. As he described to me what he knew, I was outraged; I was also saddened and wanted to comfort him and the others who suffered.

I myself was just months away from having been stabbed in the chest by a white male in Bensonhurst on the other side of Brooklyn for leading a peaceful march protesting the racial killing of 16-year-old Yusuf Hawkins. Though my assailant had been arrested, I was wrestling with how I would respond. My emotions told me to be angry: This man came close to killing me and robbing my very young daughters of a father. My training told me otherwise. Having grown up in the aftermath of the movement of Dr. Martin Luther King, having become youth director at age 13 of the New York chapter of his organization (in the year of his assassination), I had been taught forgiveness and reconciliation.

As I looked at and listened to this father who had just lost his son, what became clear to me, and is still as clear 20 years later, was that the only one not showing rancor and bitterness back then was Carmel Cato. Somehow he had buried his feelings under an impenetrable mask of dignity.

I wished I had that discipline. We left his home and went to Kings County Hospital. I was there when he saw his niece, who had been severely injured in the car accident. I was there when he identified the body of his son. And when we returned back to his home, the streets were ablaze with violence. He and I went to the precinct, where he said that he did not want his son to be identified with any violence. The next day, as I came back from New Jersey, the crowds had gotten smaller. But the rhetoric was still ugly

My responsibility was to prepare for the funeral of this young man whom I was now asked to eulogize and to pursue some sense of justice for a family that had lost a child who had done nothing but play with his cousin in front of his home.

The mayor at that time was David Dinkins, whom I had known since I was a teenager. He was being attacked by all sides. Extremists in the Jewish community said he was catering to the black community. Extremists in the black community said he was a sellout to the Jewish community. In that climate he tried to strike a balance -- a balance that included asking me to not risk peaceful marches. I preached the eulogy, and in the eulogy I said that I knew there were many who wanted me to attack him, but I wouldn’t. Still, I was going to lead marches aimed at calling on the driver to have to account for whatever actions led to the death of Gavin Cato.

In the eulogy I said we must stop blacks who commit criminal acts such as snatching bags on Eastern Parkway, and we must also deal with the likes of the Oppenheimer family -- which at the time was trading diamonds with apartheid South Africa.

Extremists seized upon that to say that I was calling all Jews diamond merchants, and I spent years defending the statement rather than recognizing that in hours of tension, one must be clearer than at any other time.

It is not enough to be right. We had our marches, and they were all peaceful. But with the wisdom of hindsight, let's be clear. Our language and tone sometimes exacerbated tensions and played to the extremists rather than raising the issue of the value of this young man whom we were so concerned about.

The other thing that we should have expressed more clearly was the precious value of Yankel Rosenbaum, who was killed by a mob that night. The fact that I was not anywhere near Crown Heights and knew nothing about the events did not mean I shouldn't have addressed that in my eulogy -- because the real lesson of Crown Heights is that we can't keep choosing between whose life is of more value and who is a greater victim. All these years later, there are still those who would rather choose victims than help all of us as a society choose constructive problem-solving over rancor and violence.

I later decided to forgive the man who stabbed me. I even visited him in jail. I did it because of the teachings of Dr. King and the example of Carmel Cato.

Twenty years later, I have grown. I would still have stood up for Gavin Cato, but I would have also included in my utterances that there was no justification or excuse for violence or for the death of Yankel Rosenbaum. I would have shared a story about what happened when, as a young man, I was brought to the Jewish Theological Seminary by one of the civil rights leaders who had been an aide to Dr. King.

That day, I was introduced to Rabbi Abraham Joshua Heschel. Rabbi Heschel had marched with Dr. King in Selma in support of the Voting Rights Act. For doing so, Heschel was attacked by some in his community who were very conservative and thought a theologian should stay in his proper place.
He gave me a book and autographed it and, as we talked, I asked him about Dr. King -- the man and the hero.

Crown Heights showed how some of us, in our smallness, can divide. We must seek to be big. Next weekend, we will unveil the monument to Martin Luther King in Washington. I will speak at the ceremony along with members of the King family and the President of the United States.

I will continue to think about the value of the lives of Gavin Cato and Yankel Rosenbaum as I look up at the big statue of Dr. King. I will look towards the heavens and I will wink at Rabbi Heschel.