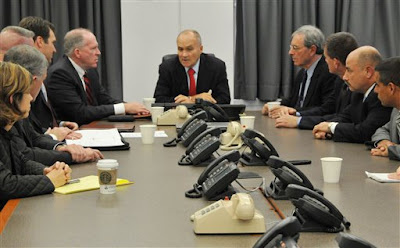 New York, NY - Working with the CIA, the New York Police Department maintained a list of “ancestries of interest” and dispatched undercover officers to monitor Muslim businesses and social groups, according to new documents that offer a rare glimpse inside an intelligence program the NYPD insists doesn’t exist.

The documents add new details to an Associated Press investigation that explained how undercover NYPD officers singled out Muslim communities for surveillance and infiltration.

The Demographics Unit, a squad of 16 officers fluent in a total of at least five languages, was told to map ethnic communities in New York, New Jersey and Connecticut and identify where people socialize, shop and pray.

Once that analysis was complete, according to documents obtained by the AP, the NYPD would “deploy officers in civilian clothes throughout the ethnic communities.”

The architect of this and other programs was a veteran CIA officer who oversaw the program while working with the NYPD on the CIA payroll. It was an unusual arrangement for the CIA, which is prohibited from spying inside the U.S.

After the AP report, New York Mayor Michael Bloomberg said the NYPD has kept the city safe and does not take religion into account in its policing. The NYPD denied the Demographics Unit exists.

“There is no such unit,” police spokesman Paul Browne said before the first AP story ran. “There is nothing called the Demographics Unit.”

Internal police documents show otherwise. An NYPD presentation, delivered inside the department, described the mission and makeup of the Demographics Unit. Undercover officers were told to look not only for evidence of terrorism and crimes but also to determine the ethnicity of business owners and eavesdrop on conversations inside cafes.

A police memorandum from 2006 described an NYPD supervisor rebuking an undercover detective for not doing a good enough job reporting on community events and “rhetoric heard in cafes and hotspot locations.”

How law enforcement agencies, both local and federal, can stay ahead of Islamic terrorists without using racial profiling techniques has been hotly debated since 9/11. Singling out minorities for extra scrutiny without evidence of wrongdoing has been criticized as discriminatory. Not focusing on Muslim neighborhoods has been equally criticized as political correctness run amok. The documents describe how the nation’s largest police force has come down on that issue.

Working out of the police department’s offices at the Brooklyn Army Terminal, the Demographics Unit maintained a list of 28 countries that, along with “American Black Muslim,” it considered “ancestries of interest.” Nearly all are Muslim countries.

Undercover officers known as “rakers” — a term the NYPD also denied existed — were then told to participate in social activities such as cricket matches and visit cafes and clubs, the documents show.

Police had a list of “key indicators” of problems. It included obvious signs of trouble such as criminal activity and extremist rhetoric by imams. But it also included things commonly seen in neighborhoods, such as community centers, religious schools and “community bulletin boards (located in houses of worship).”

At least one lawyer inside the police department has raised concerns about the Demographics Unit, current and former officials told the AP. Because of those concerns, the officials said, the information gathered from the unit is kept on a computer at the Brooklyn Army Terminal, not in the department’s normal intelligence database. The officials spoke on condition of anonymity because they were not authorized to discuss the intelligence programs.

In an email Tuesday night, Browne disputed the AP’s original story, saying the NYPD only follows leads and does not simply trawl communities.

“We do not employ undercovers or confidential informants unless there is information indicating the possibility of unlawful activity,” Browne wrote.

That issue has legal significance. The NYPD says it follows the same guidelines as the FBI, which cannot use undercover agents to monitor communities without first receiving an allegation or indication of criminal activity.

After the Sept. 11, 2001, terrorist attacks, the CIA sent a respected veteran officer, Lawrence Sanchez, to New York, where he worked closely with the NYPD. Officials said he was instrumental in creating programs such as the Demographics Unit and met regularly with unit supervisors to guide the effort. After a two-year rotation in New York, Sanchez took a leave of absence, came off the agency’s payroll and became the NYPD’s second-ranking intelligence official. He formally left the agency in 2007 and stayed with the NYPD until last year.

The CIA recently dispatched another officer to work in the Intelligence Division for what officials described as a management sabbatical. A U.S. official familiar with the NYPD-CIA partnership said Sanchez’s time in New York was a unique assignment created in the wake of the 9/11 attacks. But the official said the current officer’s job was much different and was an opportunity for him to learn from an organization outside the CIA.

Both the CIA said and the NYPD have said the agency is not involved in domestic spying and said the partnership is the kind of counterterrorism collaboration Americans expect.

The NYPD Intelligence Division has unquestionably been essential to the city’s best counterterrorism successes, including the thwarted plot to bomb the subway system in 2004. Undercover officers also helped lead to the guilty plea of two men arrested on their way to receive terrorism training in Somalia.

“We throw 1,200 police officers into the fight every day to make sure the same people or similarly inspired people who killed 3,000 New Yorkers a decade ago don’t come back and do it again,” Browne said earlier this month when asked about the NYPD’s intelligence tactics.

The Demographics Unit had officers who spoke Arabic, Bengali, Hindi, Punjabi and Urdu, according to the police presentation. The undercover officers were divided into teams based on ethnicity. Arab officers could blend into Arab neighborhoods and Southwest Asian officers, those from Pakistan and Afghanistan, could more easily blend into those neighborhoods.

Rep. Yvette Clarke, a Democrat who represents much of Brooklyn and sits on the House Homeland Security Committee, said the NYPD can protect the city without singling out specific ethnic and religious groups. She joined Muslim organizations in calling for a Justice Department investigation into the NYPD Intelligence Division. The department said it would review the request for an investigation.

“There were those who, during World War II, said, ‘Good, I’m glad they’re interning all the Japanese-Americans who are living here,’” Clarke said. “But we look back on that period with disdain.”