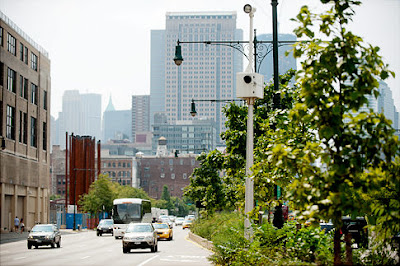 New York's driver nanny cams are working, generating more than $52 million in fines last year from unsuspecting motorists who blew through red lights while the cameras were rolling, records show.

There are now 150 red-light cameras scattered throughout the city, and the pressure is on in Albany to add 40 new overhead contraptions capable of measuring a driver's speed. The electronic info is then used to issue tickets - all without a cop.

"These cameras go a long way towards making this a safer city."

That's up about $15.5 million - 29% - from 2009, when there were just 100 cameras citywide, according to Department of Transportation stats. This year's numbers aren't yet available, a DOT spokesman said.

Each $50 red-light summons is mailed to the registered owner of the vehicle, along with a crystal-clear photo of the license plate - and the car as it breezed through the intersection.

Michael Murphy, a spokesman for Transportation Alternatives, is a big believer in the cameras.

"When you are taking a 2-ton piece of machinery and driving around public streets, you have a responsibility to drive safely," Murphy said. "It's more than a matter of dollars and cents. It's a matter of life and death."

Only last year surpassed 2007 in the number of tickets issued via red-light cams.

That's to be expected, experts said.

When a camera is first installed there's a spike in tickets, but motorists soon wise up, one DOT official said. Drivers quickly learn where the cameras are along their daily route, and violations can plummet over time by as much as 60%, the official said.

Vacca sees this as a good problem.

"I hope we get to the point where these cameras do not raise revenue and there is compliance with red lights," he said. "Stop means stop."

The state Legislature approved a bill in 2009 to add an additional 50 cameras to the original 100. Community groups hoping to force drivers to slow down are among those now pressing Albany to approve a pending bill that would clear the way for 40 new speed cameras.

Some motorists are convinced the cams are about cash, not safety.

"This is just about money," truck driver Vishnuve Singh, 38, said about the camera at Houston St. and First Ave. on Manhattan's lower East Side.

"The city is in bad shape right now. They wouldn't be putting more and more [in] if they didn't think they could make some money."