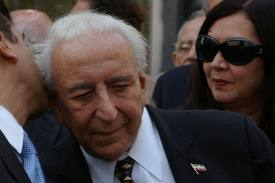 Ezat Delijani, who fled his native Iran during the revolution and became a prominent Los Angeles real estate investor, philanthropist and savior of landmark theaters, has died.

His death was confirmed Sunday by the office of Los Angeles City Councilman Jose Huizar. Huizar said that Delijani, former president of the Iranian American Jewish Federation, passed away Saturday.

In 1979, Delijani fled Iran’s Islamic Revolution and arrived in Los Angeles, where he quickly became a real estate magnate, notably in the fashion and textile district.

In 1982, then-Mayor Tom Bradley asked Delijani to buy the Los Angeles Theatre, one of the historic but timeworn movie palaces that lined Broadway. The theater was scheduled to be demolished.

Delijani went on to buy three more Broadway theaters,the Palace, State and Tower theaters. Several years ago, he began working with Huizar and business leaders on a campaign to revitalize the Broadway corridor. In June, the Palace Theatre reopened with a showing of “Sunset Boulevard” after a $1-million restoration.

Delijani’s son, Shahram Delijani, once described the theaters as his father’s gift to Los Angeles – a way to thank the region for taking in the family.

The intersection of 7th Street and Broadway was formally dedicated as Ezat Delijani square in 2009.

Delijani was also instrumental in the creation, in 1999, of an Iranian American Jewish center in Hollywood.

Delijani’s political ties raised eyebrows in 2008. Delijani, who had long donated campaign money and gifts to Los Angeles County Sheriff Lee Baca, found himself in a lease dispute with one of his tenants in Beverly Hills, a pharmacist. When Beverly Hills police declined to investigate because the case appeared to be a civil matter, the Delijani family contacted Baca.

According to a Times investigation, Baca launched a criminal investigation, which was assigned “rush” status,typically reserved for high-priority cases. When prosecutors declined to file charges, citing a lack of evidence, Baca met with L.A. Dist. Atty. Steve Cooley to learn how to appeal that decision.

Late in 2010, prosecutors reversed their decision and filed a forgery charge against Delijani’s tenant. Baca denied that he’d given Delijani special treatment, and Cooley said he was not involved in the decision to pursue charges