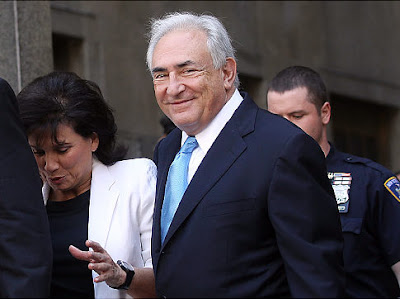 While Thompson spoke, Diallo stood silently beside him.

"If the Manhattan District Attorney, who is elected to protect our mothers, our daughters, our sisters, our wives, our loved ones, is not going to stand up for them when they are raped or sexually assaulted, then who will?" Thompson asked.

There was no reply from Vance. But lawyers for Strauss-Kahn praised the DA.

"We have maintained from the beginning of this case that our client is innocent. We also maintained that there were many reasons to believe that Mr. Strauss-Kahn's accuser was not credible," they said in a statement.

"Mr. Strauss-Kahn and his family are grateful that the District Attorney's office took our concerns seriously and concluded on its own that this case cannot proceed further."

Strauss-Kahn is scheduled to return to court Tuesday for a hearing on the prosecutors' move.

In a pre-emptive move, Thompson and legal partner Douglas Wigdor filed a motion asking for a special prosecutor to take over the case.

"The DA is unfit to try this case," the lawyers wrote in their motion. "The DA has sabotaged Defendant Strauss-Kahn's prosecution."

They accused prosecutors of "outright disrespect" towards Diallo in their motion, a copy of which was obtained by The Daily News.

Strauss-Kahn, who denies assaulting Diallo, has lain low since he was released from house arrest July 1 after prosecutors claimed Diallo had repeatedly lied to them and had credibility problems.

He still faces a civil lawsuit that Diallo filed against him earlier this month and a complaint from a French writer who said he tried to rape her during a 2003 interview.

The decision to drop the case against Strauss-Kahn is a stunning setback for Vance, who had insisted at the outset that there was "sufficient" evidence to try the philandering Frenchman - and successfully pushed for a quick indictment.

In letter to the DA's office, Thompson claimed prosecutors thought so little of Diallo's claims they actually kicked her out of their office after one especially stormy meeting.

"No one with half a brain would ever put her on the stand," Assistant District Attorney Joan Illuzzi-Orbon said during the June 9 meeting, Thompson claimed.

Then, after the sitdown deteriorated into "screaming and yelling," prosecutors told Diallo to "get out," Thompson charged.
Law enforcement sources insisted Monday that Thompson's claims that they treated Diallo badly were false.

Yet three weeks after that supposed meeting, Strauss-Kahn was sprung - his reputation shot by then.
Once a front-runner for the French presidency, Strauss-Kahn was forced to resign as head of the International Monetary Fund after he was arrested.

Diallo, 32, accused Strauss-Kahn of forcing her to perform oral sex on him when she went to clean his luxury suite at the Sofitel hotel on May 14. Less than a month later, the case against was unraveling.

On July 1, prosecutors told defense lawyers Diallo had lied to them repeatedly, including about being gang-raped in her native Guinea on her application for asylum in this country. They also found she had ties to a convicted drug dealer.

Prosecutors said that web of lies would make it hard to persuade a jury to accept Diallo's version of what happened.

Though there is forensic evidence of sex between the two, Strauss-Kahn's team has claimed the sex was consensual.

D.A.: Drop Some or All Strauss-Kahn Charges: MyFoxNY.com