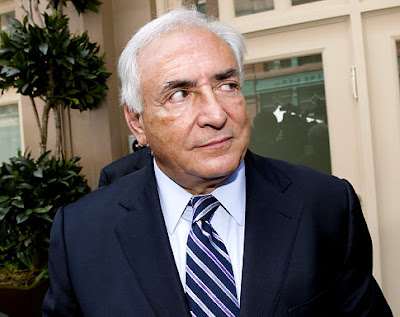 Still glowing from a victory in criminal court, lawyers for Dominique Strauss-Kahn have sharpened their focus on the civil case.

Strauss-Kahn's lawyers filed court papers in the Bronx on Friday, asking a judge for more time to respond to a lawsuit filed by hotel maid Nafissatou Diallo. The motion will be heard on Sept. 9 in the Bronx - the first court date in the civil case.

The maid said in the suit that the French politician "brutally and violently assaulted" her at the Sofitel hotel in May. The complaint called the alleged assault "violent and sadistic."

Diallo promises in the civil suit to present testimony from other women who say they were sexually attacked by Strauss-Kahn.

Prosecutors said Diallo, 32, lied on an asylum application about being gang-raped by soldiers in her native Guinea. She could be deported, officials said.

Strauss-Kahn, 62, left his rented Tribeca townhouse on Friday, hopping a plane to Washington. Friends said he wanted to thank supporters at the International Monetary Fund before returning to France. He resigned as IMF chief after his arrest.