ATF chief who oversaw Operation Fast and Furious to step down 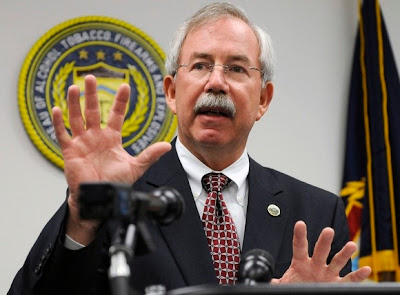 Kenneth E. Melson, who has faced heavy criticism in connection with the controversial Fast and Furious gun-trafficking investigation, announced Tuesday that he is stepping down as acting director of the Bureau of Alcohol, Tobacco, Firearms and Explosives.

Melson shared the news in a conference call at 11:30 a.m. EDT with supervisors at the bureau's field offices, telling them that he will be moving back to the Department of Justice to serve as a senior advisor with the Office of Legal Programs. His resignation will take effect at 5 p.m. EDT.

Despite all the problems with Fast and Furious under Melson's tenure, Holder praised the out-going acting director and his new responsibilities.

"Ken brings decades of experience at the department and extensive knowledge in forensic science to his new role and I know he will be a valuable contributor on these issues," Holder said. "As he moves into this new role, I want to thank Ken for his dedication to the department over the last three decades."

But simply transferring Melson within the Justice Department organization did not immediately sit well with some critics, including Sen. John Cornyn (R-Texas), who has asked Justice officials for an accounting of all Fast and Furious cases in Texas.

"Instead of reassigning those responsible for Fast and Furious within the Department of Justice," Cornyn said, "Atty. Gen. Holder should ask for their resignations and come clean on all alleged gun-walking operations, including a detailed response to allegations of a Texas-based scheme."

Under Melson's leadership, ATF launched Operation Fast and Furious, through which agents were to watch -- and in some cases record on video -- illegal gun sales and then use surveillance teams and electronic eavesdropping to follow the guns and learn how the weapons were moved. The goal was to arrest cartel leaders overseeing gun smuggling on the U.S. side of the border with Mexico.

But the chase for guns and cartel leaders soon hit a dead end. The ATF was attempting to follow each of the weapons as they were moved from the straw men who bought them illegally at gun shops to what officials expected would be cartel higher-ups in the U.S., who would move them to Mexico.

The agency, which didn't have the resources to follow so many weapons, soon lost track of many of them. When officials did follow them to the next level, the buyers of the guns often turned out to be Mexicans living legally in the U.S. and not cartel honchos.

An investigation by the House Oversight and Government Reform Committee, chaired by Rep. Darrell Issa (R-Calif.), uncovered emails that showed Melson was regularly briefed on the botched operation.