Team DSK on the 'attack' 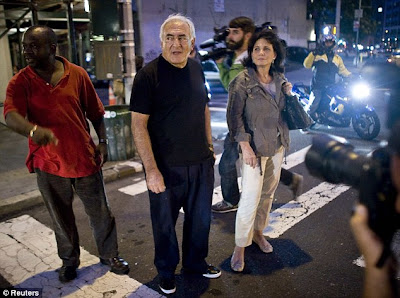 Dominique Strauss-Kahn's lawyers strengthened their legal threats against the hotel maid who accused the former IMF chief of attempted rape, saying they'll file a counter lawsuit if her reps don't tone down attacks against the frisky Frenchman, a Paris newspaper reported yesterday.

DSK could file a countersuit against Diallo "if the attacks of her lawyers become too bad," he told Le Journal du Dimanche.

Diallo accused Strauss-Kahn of sexually assaulting her in his suite at the Sofitel hotel in May. Prosecutors dropped the case, saying Diallo's past lies would make her an unreliable witness. The maid is pursuing Strauss-Kahn in a Bronx civil suit.

Even if Diallo wins her lawsuit, Brafman said his client is virtually judgment-proof, because he has no real wealth.

"DSK [is not] a rich man," Brafman said. "It's his wife who has an important fortune."

A rep for Diallo couldn't be reached for comment yesterday.