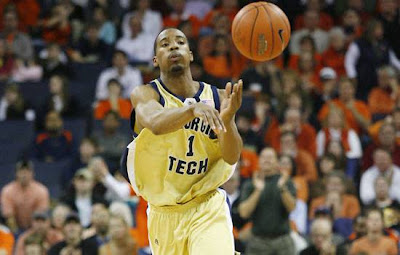 ATLANTA – With Atlanta native and former Georgia Tech basketball star Javaris Crittenton arrested late on Monday night in California in connection with a murder in Atlanta, focus on the case will now turn to legal maneuverings.

Manny Arora, a veteran of high-profile cases, described to FoxSportsSouth.com how the case might proceed. Arora worked on the defense teams of Baltimore Ravens linebacker Ray Lewis, former Atlanta Thrasher Dany Heatley and also defended NFL player Adam “Pacman” Jones. Prior to becoming a defense attorney, he worked as a prosecutor.

Crittenton is accused in the Aug. 19 shooting death of a 22-year-old mother of four, Jullian Jones. Witnesses have said, according to the Atlanta Journal-Constitution, that shots came from a black Chevy Tahoe and police believe Crittenton was retaliating for a robbery and hit the wrong person. Crittenton’s lawyer Brian Steel has said that his client is not guilty.

In terms of procedure, the state of Georgia will have to ask for extradition on Crittenton from California. Arora said it is difficult to stop extradition, as the only way to avoid it is to prove a case of mistaken identity – that the person arrested is not in fact Crittenton.

“I would imagine they’ll go get him in the next 30 days and when he gets here if he hasn’t already been indicted, he’ll get a preliminary hearing right away,” Arora said. “And that would probably give us a lot of information. If the (district attorney) wants to keep a lid on it all, they’ll do a quick grand jury indictment and that, by law, doesn’t allow you to get a prelim anymore.

“The only thing you can do at that point is file for a bail hearing and the chances of getting bail in a murder case is very slim.”

So much of the case against Crittenton depends on the facts and for now those remain sketchy. Arora said among the first things to challenge would be eyewitness testimony. He said pertinent questions a defense lawyer would ask of those witnesses would concern the time of day, the lighting and how far away they were.

“Generally, when someone starts shooting, you’re not looking at the shooter,” Arora said. “You’re ducking for cover. There’s a lot of things you can cover with that. There’s a lot of good science behind misidentification in a high-pressure situation.”

Arora cited the work of the nonprofit group The Innocence Project, which was co-founded by prominent defense attorney Barry Scheck, a part of O.J. Simpson’s defense team. The group, which specializes in DNA testing, has exonerated 273 wrongly convicted individuals since it was founded in 1992.

The Website of the Innocence Project states that 75 percent of wrongful convictions that end up overturned relied on “eyewitness misidentification.”

Arora said that more troubling facts for Crittenton would be if a red light camera has a photo of the alleged vehicle and shooter, if an eyewitness saw him from a distance of about five feet or less and if the vehicle and the suspect meet the police’s description.

“That’s some good stuff,” Arora said. “I’m just saying, this far, by itself (an identification of the car) doesn’t really carry a whole ton of weight. It doesn’t help, but certainly it’s not ‘the end all be all.’”

Arora said many of the cases he has worked do not involve the police’s identification of a murder weapon. He said if the police can match bullet fragments or shells from the scene to a legally registered weapon owned by the accused – even if they do not have the weapon at trial – then it can create problems for the defendant.

“Then it starts getting to be more problematic if things like that start happening,” he said.

In terms of impaneling a jury, Arora said that could be tricky because of the high-profile nature of the case.

“It depends on how long before the trial gets there,” he said. “This thing’s going to be all over the press. You’ve got a local person that’s successful, wealthy, NBA. You may have to do questionnaires to get through a couple of hundred people.”

Right now, the legal process seems headed in the direction of a trial for Crittenton. It’s a sad story for a player who, as a high school student, was a member of the Beta Club and Future Business Leaders of America but whose life seems to have gone astray. In a high-profile incident, NBA Commissioner David Stern suspended him 38 games during the 2009-10 season for a gun-toting incident involving teammate Gilbert Arena in the Washington Wizards locker room.

As a sophomore in high school, he won a state basketball championship at Southwest Atlanta Christian Academy while playing alongside NBA star Dwight Howard.

Howard’s father, also named Dwight, was athletics director at the school while Crittenton was enrolled there and worked in law enforcement. Dwight Howard Sr.’s brother is Fulton County District Attorney Paul Howard, whose office will be in charge of prosecuting the case.

Paul Howard often attends Dwight’s Orlando Magic games in Atlanta and has been seen around the camp that Dwight runs each summer at a local school. It would not be surprising if Paul Howard knows Crittenton personally – though that would not be cause for him having to recuse himself from overseeing the case, Arora said.

Southwest Atlanta Christian is affiliated with the Fellowship of Faith Church in south Atlanta. A 1998 Atlanta Journal-Constitution article about Dwight Howard Sr.’s involvement in athletics read that “A main purpose of his coaching is to keep youngsters from having to deal with his brother, Fulton County District Attorney Paul Howard. He has successfully met this aim.”

“’We have a good track record with all of the children in our program,’ Dwight Howard said. ‘We’ve only had one child who’s ever been arrested. We want to keep children on the right side of the law.’”