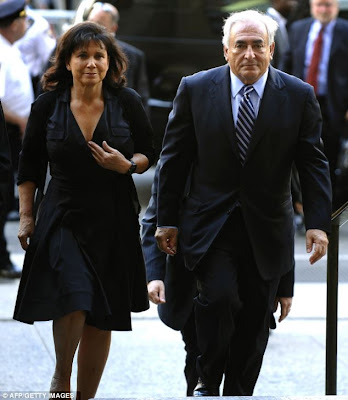 The philandering Frenchman got the green light to leave Tuesday after a judge dismissed charges that he sexually assaulted a Manhattan hotel maid - and an appeals court rejected a call for a special prosecutor.

"It's the end of a very long and terrible story," Strauss-Kahn said in French outside the Tribeca townhouse he's been renting.

"We have some little things to do before we leave. I'm looking forward to going back to France very soon."

The implosion of the Strauss-Kahn case was a blow to District Attorney Cy Vance Jr., who insisted early on there was "sufficient" evidence to try him - and successfully pushed for a quick indictment.

Vance's unlucky streak continued when the press conference he called after the judges' rulings was interrupted by the 5.9 magnitude earthquake that rattled the East Coast.

"She's devastated," her lawyer, Kenneth Thompson, said. "She and her daughter cried all night. They couldn't bring themselves to come to court."

The rulings came as no surprise.