Irene Forces Cancellation of Flights to and From Israel 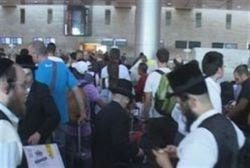 El Al, Delta and US Airways have cancelled flights to and from Israel as hurricane Irene churns towards the Big Apple.

El Al’s 001 and 027 flights from Israel were grounded Saturday night and early Sunday morning, and flights 026 and 028 did not take off from New York, where LaGuardia and JFK airports were shut down, along with the airport in Newark, New Jersey.

US Airways canceled its flights to and from Philadelphia and Tel Aviv.

Nearly 10,000 flights in the United States have been grounded by the storm, which so far has killed four people after having first striking the coast of North Carolina.

American Airlines cancelled all flights in the area of New York City in order to allow its employees time to reach home before the storm strikes.

New York City also has suspended all subway and bus service. Atlantic City, on what should have been a packed summer weekend in the gambling resort, is empty.

The economic damage from Hurricane Irene is expected to run into the billions. It is the worst storm to hit the East Coast since Gloria thundered into the area in 1985, leaving 11 people dead.