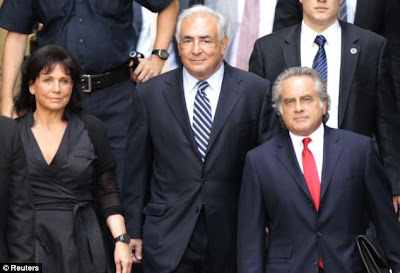 A judge this morning dismissed all charges against former International Monetary Fund honcho Dominique Strauss-Kahn, disentangling the Frenchman -- at least criminally -- from the lurid sex case that has kept him tethered to the US.

In a statement issued after the hearing, Strauss-Kahn said, “These past two and a half months have been a nightmare for me and my family. I want to thank all the friends in France and in the United States who have believed in my innocence, and to the thousands of people who sent us their support personally and in writing.

"I am most deeply grateful to my wife and family who have gone through this ordeal with me. ... We will have nothing further to say about this matter and we look forward to returning to our home and resuming something of a more normal life."

An appeals court this afternoon denied a request made by the maid's lawyer Kenneth Thompson for a special prosecutor to take over the case.

Strauss-Kahn, who will pick up his French passport on Wednesday, won't be hopping on the next plane to Paris and plans to travel to Washington where he has a home, DSK's lawyer William Taylor said.

The dismissal followed Assistant DA Joan Illuzzi-Orbon telling the judge that the decision to seek the indictment's dismissal was the result of "thoughtful and careful deliberation," was not made lightly, and "should not be construed that we are in any way condoning the defendant's behavior."

"We do not oppose the motion," came Taylor's terse response.

Strauss-Kahn arrived at court via Escalade from the $50,000-a-month TriBeCa townhouse where he has stayed for the last three months while under indictment for allegedly pouncing, naked, on hotel maid Nafissatou Diallo when she came to clean his luxe suite at the Sofitel hotel on May 14.

His wife, Anne Sinclair, at his side, Strauss-Kahn braved a gantlet of shouting protesters.

Prosecutors had stockpiled their most pointed details of what they called Diallo's "fatal" credibility issues in a 25-page document filed yesterday -- in which they labeled her a liar and a fraud.

"In virtually every substantive interview with prosecutors, despite entreaties to simply be truthful, she has not been truthful, on matters great and small, many pertaining to her background and some relating to the circumstances of the incident itself," prosecutors say in the damning document.

"After an extensive investigation, it is clear that proof of two critical elements -- force and lack of consent -- would rest solely on the testimony of the complaining witness at trial," prosecutors wrote in asking for dismissal. "Indeed, the case rises and falls on her testimony."

But, the filing concludes, "because we cannot credit the complainant's testimony beyond a reasonable doubt, we cannot ask a jury to do so."

Among the DA's Diallo-damning evidence is her history of making "fraudulent" statements under oath in the DSK case in the past and the conflicting accounts she's given to news reporters, investigators and grand jurors concerning the alleged assault and her actions in its aftermath.

"We have no confidence that the complainant would tell the truth on this issue if she were called as a witness at trial," the DA's papers say.

And Diallo is an emphatic liar, prosecutors say -- speaking haltingly and actually crying as she recounted a false story of being gang raped by soldiers in her native Guinea.

"During the first interview, [she] even laid her head face down on her arms on a table in front of her," as she described her then-2-year-old daughter being pulled from her arms and flung to the ground, the papers say.

Cornered in another unspecified lie, "she dropped to the floor, and physically rolled around while weeping."

Diallo also failed to disclose to prosecutors, when asked, some $60,000 in deposits made into her checking account "by other individuals in four different states."

Confronted on the deposits, she claimed they were from her fiancé, Amara Tarawally -- whom investigators discovered had been convicted on drug charges in Arizona after trying to buy $36,500 in marijuana from undercover cops.

Diallo insisted the money Tarawally had put in her account was from his clothing and accessories business, prosecutors note.

Diallo also lied repeatedly to prosecutors in insisting, with much emotion, that no one could "buy" her, and that she had no interest in making money off the case, the papers note.

"Very close in time to these statements, the complainant had a recorded conversation with her incarcerated fiancé, in which the potential for financial recovery in relation to the May 14, 2011 incident was mentioned," the papers say.

"Although there is nothing wrong with seeking recovery from a defendant in a civil suit, the complainant's disavowal of any financial interest is relevant to her credibility."