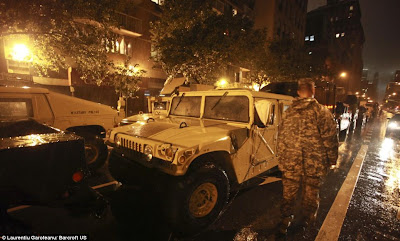 The Category 1 hurricane forced New Yorkers to hunker down in their homes and apartments, turning the city eerily quiet and desolate as the brunt of the storm hit overnight.

“Everything is still in effect,” said National Hurricane Center spokesman Dennis Feltgen. “The last thing people should do is go outside. They need to get inside and stay in a safe place until this thing is over."

The center of the hurricane was just 40 miles from New York City. The storm, moving north-northeast and packing winds of 75 mph, was forecast to engulf the Big Apple by 8 a.m.

The National Weather Service had briefly issued a tornado warning for Brooklyn and Queens at 4 a.m., but the warning expired 15 minutes later following reports of toppled trees in the area. There was no immediate confirmation of any tornadoes.

Three inches of rain had fallen in Central Park as of this morning, wind gusts of 60 mph had been recorded overnight.

The National Hurricane Center said the center of the massive storm had reached land near Little Egg Inlet, about 85 miles southwest of Manhattan, at 5:35 a.m., officials said.

The eye of the hurricane had slammed into North Carolina on Saturday morning, before returning to the Atlantic Ocean, straddling the Jersey Shore as it set its sights on the five boroughs.

Hours before Hurricane Irene reached the Big Apple, a 58 mph wind gust was recorded at Kennedy Airport, bringing with it a 4-foot surge in New York Harbor.

National Weather Service meteorologist Ashley Sears said a storm surge of 4 to 8 feet was expected to rush in just before the eye crosses into New York City.

The city and parts of Long Island are expected to get as much as 12 inches of rain by the time the storm passes over the region by this afternoon.

Con Ed and other utilities are reporting a total of more than 121,500 outages in Long Island and Westchester County.

More than 407,000 homes and businesses in New Jersey are also without power as winds and rain from Hurricane Irene lash the state.

Atlantic City Electric said about 104,000 customers had no power, including 40,000 in Atlantic County.

City officials said a portion of the Jackie Robinson Parkway in Queens was flooded.

The deluge of water also shut down a southbound segment of the FDR Drive in East Harlem.

Parts of the Grand Central Parkway in Queens and the Cross Bronx Expressway also are closed because of flooding.

City officials note that no big stretches of roadway have had to close yet.

There were also flooded roads along the Jersey Shore and in Nassau and Suffolk counties.