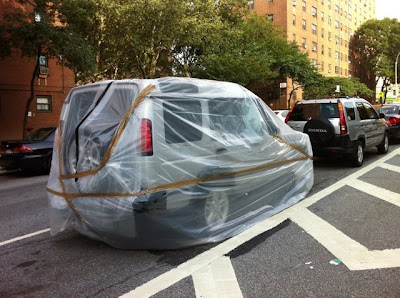 Hurricane Irene landed its first ugly blows in the mid-Atlantic Saturday, killing 11 people within hours after reaching land and wreaking havoc along the East Coast.

The 500-mile-wide storm pounded the Outer Banks of North Carolina with reported gusts of 115 mph, even as the hurricane weakened slightly on its ruinous northward path.

The deadly storm — which could inflict between $5 billion and $10 billion in damage — knocked out power to 800,000 people, forced the evacuation of 2.3 million others, and canceled more than 9,000 weekend flights.

A state of emergency was declared in the nation’s capital just four days after an earthquake shook things up, with President Obama visiting FEMA’s national response coordination center.

“You guys are doing a great job obviously,” the President said as the hurricane bore down on Washington. “This is obviously going to be a touch and go.”

The hurricane was expected to rake Washington on its way to New York Sunday morning.

Although Irene was downgraded to a Category 1 hurricane, its immense power was felt from Myrtle Beach, S.C., to Nova Scotia, Canada, authorities said.

About one in five Americans — an estimated 65 million people — could wind up in its path, according to a Bloomberg News estimate.

North Carolina’s northern neighbors were also battered, as tropical storm conditions hit Virginia, Delaware and Maryland. The worst was yet to come as the hurricane moved north at about 13 mph.

The hurricane caused its first fatality when a North Carolina man was crushed beneath a tree limb snapped off by 60-mph winds.

A second North Carolina man died in a storm-related car crash, while officials reported a pair of deaths in Virginia: An 11-year-old boy killed in his apartment by a falling tree, and a victim killed inside a car by another downed tree.

In Florida, a surfer drowned in the heavy waves.

The deaths weren’t enough to convince some it was time to evacuate.

“There’s nothing you can do now but wait,” said Leon Reasor, who opted to ride out the storm in Buxton, N.C. “Things are banging against the house. I hope it doesn’t get worse, but I know it will.”

A pair of piers on the Outer Banks were destroyed, and the roof of a local car dealership was peeled off by winds that whipped at a steady 85 mph.

Power at a Morehead City, N.C., hospital went out, forcing the staff to use emergency generators.

The hurricane, against long odds, also shuttered all 11 casinos in Atlantic City — just the third time that has happened in 33 years of legal gambling there.

And Amtrak, in anticipation of today’s pounding in the northeast, canceled its Sunday service in the region.

Not everyone was running from Irene. Charlie Koetzle, 55, walked past the shuttered Hurricane ride on the boardwalk in Ocean City, Md., wearing flip-flops and a bathing suit, to get a glimpse of the storm.

“I always wanted to see one,” he said.