The chicken slaughterhouse in Mea She’arim on Tuesday. 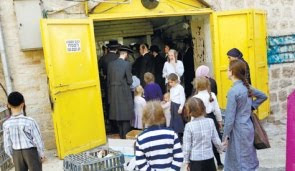 The illegal slaughterhouse in Mea She'arim, which the police closed two months ago, is back in action.

Six weeks ago, Jerusalem's Mea She'arim neighborhood was transformed for a few hours into a battlefield where ultra-Orthodox clashed with police. The cause was a raid by the Israel Tax Authority and Jerusalem municipality on an illegally operated slaughterhouse in the neighborhood. As the incident - which resulted in injuries to two policemen and six arrests - unfolded, neighborhood residents vowed that the slaughterhouse would resume operation. Last Sunday, they made good on that promise.

Shortly before the municipal and tax officials raided the establishment, they visited the houses of two ultra-Orthodox leaders suspected of operating the abattoir for years without reporting earnings for tax purposes, and without monitoring sanitation. The two leaders, Rabbi Avraham Freulich and Yoel Krauss - who is considered a kind of security operations officer for the Haredi community - were detained for questioning at the Russian Compound detention facility.

Rumors about the tax officials' arrival at their homes circulated quickly, and about 100 ultra-Orthodox streamed toward the homes of Freulich and Krauss. They hurled any objects they could find at police and tax officials - stones, metal objects, bottles, eggs and milk. One policeman was injured and treated in the field; another was taken to hospital for treatment after being hit by a stone in the stomach. Police reinforcements streamed into the area, some of them on horseback. A special police vehicle sprayed water at the rioters. After five hours, Jerusalem police detained six people on suspicion of disturbing the peace.

"We won't be deterred by these provocations," one Haredi man from Mea She'arim said during the disturbances. The man, who refused to be identified by name, belongs to a group of Haredi men that goes out at night and pastes signs urging residents to join in demonstrations and various campaigns.

"You, the media and the police, just come to defame us," he said. "You harass us all the time and flex your muscles in order to make us seem inferior. Is this slaughterhouse really the only place in Jerusalem that operates without a license?"

A few moments after police left the scene, dozens of ultra-Orthodox men filled the vacant slaughterhouse. They vowed that the establishment would reopen soon.

"This morning, a big truck parked near the slaughterhouse, and workers took a lot of chickens off it," a 20-year-old man from Mea She'arim said this week. "The place's owners fortified the main gate and built a wall behind one of the gates, to make it hard for the police the next time they come."

Residents from the neighborhood believe that the municipal and tax officials, backed by police, might attempt another raid.

"This slaughterhouse has operated this way since 1942. So why did the police and tax authorities suddenly decide to tell us that the place has to be closed? That's unacceptable," said one Mea She'arim man this week.

In an alley next to the slaughterhouse stand facilities belonging to "Torah V'yirah," one of the most radical, aggressive branches of the Haredi community. The slaughterhouse's operators also have the support of the main leadership of the Lithuanian Orthodox stream in Israel; Rabbi Yosef Shalom Elyashiv, who shuns meats other than poultry, lives near the slaughterhouse and supports the establishment.

The slaughterhouse is not back in full operation, since municipal officials confiscated pieces of equipment and butchers need to carry out much of their work by hand. But the intention is to purchase new equipment.

Freulich was released from detention, while Krauss was ordered to leave Jerusalem for two weeks. Their presence is not needed for the slaughterhouse's operation.