NY - FEMA: Residents Should ‘Stay Inside’ Dangers Power-lines Can Kill You 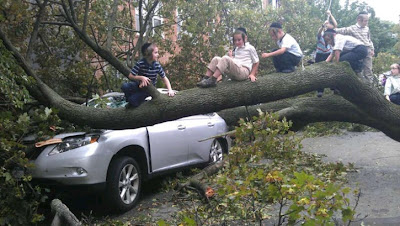 New York - The head of the Federal Emergency Management Agency urged residents of the U.S. East Coast to “stay inside, stay safe,” speaking on CNN’s “State of the Union.”

We still will have trees coming down, heavy rain, strong winds,” FEMA’s Craig Fugate said on CNN. “It’s critical to stay off the roads” because of downed power lines, Fugate, who made the rounds of the Sunday talk shows, said on NBC’s “Meet the Press” program.

The storm, which made landfall in North Carolina yesterday and in the New York City area today, has killed at least nine people and flooded the Outer Banks. It left more than 4 million homes and businesses without power as it churned up the East Coast, according to the Associated Press.

The damage from the hurricane has “not been as great as we had feared,” though flooding along the East Coast remains a danger, Fugate said on “Fox News Sunday.

We’ve got flooding everywhere and flash floods in all different parts of the state,” New Jersey Governor Chris Christie said on CNN’s “State of the Union” program. “Do not leave your homes.”

Speaking from the New Jersey emergency command center, Christie said that there are 15,000 people in emergency shelters in the state and that 500,000 are without power.
Jersey Shore Evacuations

He said that 1 million people were evacuated from the New Jersey shore in less than 24 hours, significantly reducing the impact of the storm. Newark Mayor Cory Booker, appearing on “Meet the Press,” said there were about 10 water rescues.

Fugate said on NBC he wouldn’t yet “hazard a guess” on how much damages from Hurricane Irene will cost the government and taxpayers.

The agency is “starting assessments” in North Carolina, Fugate said on “Meet the Press.” He said the U.S. government plans to work with the private sector in the rebuilding effort.

FEMA has mobilized six search and rescue squads specializing in urban areas and they are standing by in staging areas, according to Fugate on ABC’s “This Week.” None of the squads had yet been deployed, he said. State search and rescue teams performed 67 swift-water rescues in North Carolina, Fugate said on ABC.