Guardian Angels are back on Brooklyn streets 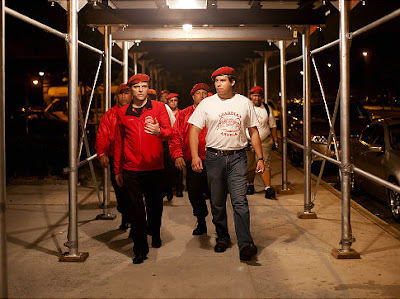 As soon as I heard one of the Guardian Angels yell, "Fight! Fight!" I knew our nice, quiet patrol of Coney Island was over.

The corner of Mermaid Ave. and W. 28th St. had turned into a war zone with almost 40 young people brawling in the middle of the two-way street. Since I was tagging along with the Guardian Angels, donning the iconic red beret and T-shirt, it was my job to break up the midnight melee.

Curtis Sliwa, leader and founder of the group, stopped our recent patrol only minutes before the fight, on a hunch.

"There's just too many young men out here. Ain't nothing but trouble going to happen," he said.

Before I knew it, I was running at top speed with the nine other Guardian Angels right into the center of the brawl. I felt my heart racing as I got closer and closer to the fight.

Glass bottles that were launched indiscriminately in the air were shattering all around me. The air was filled with the violent screams of the combatants.

More fear crept in with every step.

I'm a big guy. I can throw a few jabs and even a roundhouse kick if I have to, but this was different. I was jumping into the middle of a street brawl between two massive groups of teens and I didn't know who might be armed with what. I kept my eyes peeled and quickly scanned everyone for a knife, gun or any weapon that could turn this story into my last.

"If you don't calm down you're going to get arrested," shouted Benjamin Garcia, 47, code name "the Equalizer," at the rowdy teens.

"Move on or everyone gets locked up," yelled John Gavares, 41, code name "Zeek."

The severely outnumbered Guardian Angels tore the violent teens apart and shoved them in opposite directions, then herded the teens off the block.

"If we weren't here to stop this, someone would have gotten stabbed or shot," Sliwa said.

We continued our march down Mermaid Ave. two-by-two, zigzagging through housing projects. Sliwa told me how he formed the group as the night manager in a Bronx McDonald's in 1979. Now they patrol in 14 countries and have volunteers of all ages.

"This place is cagey," said Billy Padilla, 55. "You've got to stop this craziness."

Bessi Delapaz, 58, told me she feels much safer when the Guardian Angels are on patrol. "I don't have any problems when they're around," she said. "They are taking care of us and protecting us."

As our patrol ended at the Stillwell Ave. station at 2 a.m., I gave back my beret and T-shirt to Garcia.

"I hope you now have a better understanding of what we do," Garcia said.