Rabbi Shmuley Boteach: Time for the Jewish Community to End the Sharpton Wars 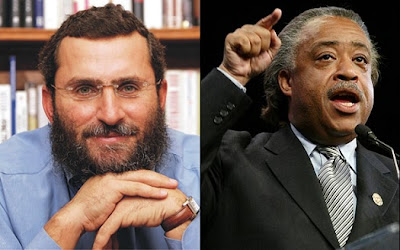 Twenty years ago, race riots erupted in Crown Heights and an innocent Jewish student was murdered in response to the accidental killing of an African-American child. After the murder, the Rev. Al Sharpton came to Crown Heights and further whipped up an already incensed crowd, leaving some in the Jewish community to demand twenty years later that Sharpton be forever shunned by Jewry and criticizing my friend Rabbi Marc Schneier for inviting him to the Hampton Synagogue.

Ten years after the Crown Heights riots, I challenged Sharpton to a public debate, which he accepted, and following our take-no-prisoners, very volatile exchange, I invited him to a kosher restaurant for dinner. He surprised me by accepting and a budding relationship ensued. After the September 11th attacks, I called Sharpton and suggested we travel together to Israel to visit victims of Islamic terror as a means of healing our two communities. Again, he surprised me by agreeing. The trip was moving, as Rev. Sharpton offered genuine comfort to Israelis with their arms and legs blown off. But it was all undone when he decided, without informing any of the organizers of the trip, that he had arranged to visit the arch-terrorist Yasser Arafat in Gaza. The trip thereafter became a fiasco and Sharpton and I returned barely speaking to each other.

But just as I wished to write him off, again he surprised me when he invited me to the Hyatt Hotel and essentially apologized for putting me in such an awkward position.

Sharpton can do that. Just when you think he's only interested in himself, he will behave in a kindly manner that will move you.

Fast forward to New Year's Eve of this year, a Friday afternoon, with the Jewish Sabbath coming in at 4:30pm. I received a call from the truly outstanding Aleph Institute seeking to help a Jewish doctor imprisoned for many years on a charge of manslaughter and who was gravely ill. Activists were seeking a pardon from outgoing New York Governor David Patterson. They connected me with Sharpton to ask that he intercede with the governor in his last few hours in office. Though all of New York was shut down, Sharpton graciously got on the line. I said, “Reverend Al, you and I have had our ups and downs. But we have essentially always respected each other and I know you have a good heart. There is a Jewish doctor who has served more than 17 years for the death of a patient. He is extremely ill and has recently buried a child. Would you speak to Governor Patterson on his behalf?” Sharpton instantly agreed and asked that the case details be sent to him as time was of the essence. I later heard that the doctor was not pardoned but was moved to a more comfortable living facility.

There can be no doubt that many of Sharpton's actions at the beginning of his career were dishonorable and incendiary, from Tawana Brawley to Crown Heights. But there can likewise be little doubt that he has shown immense personal and professional growth over the past few years. Indeed, in his recent letter to Rabbi Schneier, Sharpton wrote, “I have made mistakes in my career,” a mea culpa of sorts. Sadly, he quickly followed by saying, “But the allegations around Crown Heights... was not one of them.”

It is to his discredit that he has never accepted responsibility and apologized for the rabble-rousing role he played in Crown Heights, even though he was not responsible for the death of Yankel Rosenbaum. But at the risk of angering many in my community, including the Rosenbaum family who are the real bearers of the Crown Heights pain, it's time to move on and not allow that glaring omission to undermine our new relationship with Reverend Al. Since our trip together to the Jewish State, he has never uttered a word against Jewry or Israel and I have even been told by officials in the Israeli Consulate in New York that they share a warm relationship with Sharpton and consider him a friend.

The great black-Jewish conflicts of recent memory are largely behind us and highlighting a decades-old argument with Sharpton removes the focus from how black-Jewish relations have been redefined by outstanding new leaders like Mayor Cory Booker of Newark, who served as president of my Jewish student organization while a Rhodes scholar at Oxford. Sharpton and other African-American leaders are seeking to thwart a perceived diminished relevance in an age where America has elected an African-American president and black-Jewish animosities are the last thing on their agenda. Should we allow obsessive Jew-haters like Louis Farrakhan — who publicly supported Kaddafi to the bitter end and has yet to explain his own role in the murder of Malcolm X — to trap us in the past?

As a community, our posture must always be to offer praise where it is earned, criticism where it is warranted, and encouragement when a former antagonist leans toward becoming an ally.

Rabbi Shmuley Boteach is founding the Global Institute for Values Education. The author of 26 books, he will shortly publish 'Ten Conversations You Need to Have with Yourself.'
Posted by joe levin at 9:01 AM