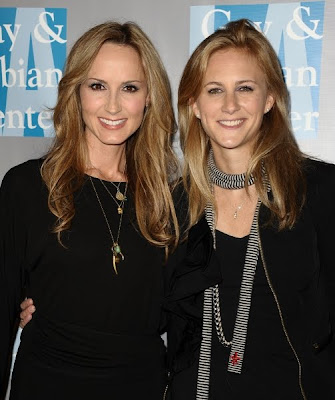 Chely Wright is a married woman!

The country artist, who came out last year, has married her girlfriend, Lauren Blitzer, according to People.

The 40-year-old singer wed her now-wife at Lauren’s aunt’s Connecticut home in front of more than 200 guests, according to the mag.

While both brides donned white gowns for the nuptials, neither wanted to wear traditional veils.

“We like our hair too much!” Chely told the mag.

As Chely is Christian and Lauren is Jewish, the newlyweds’ ceremony was presided over by both a reverend and a rabbi.

As previously reported on AccessHollywood.com, Chely came out in 2010 after years of keeping silent.

“Historically, we’ve never had an out country music artist, ever,” Chely told Access Hollywood’s Shaun Robinson in a May 2010 interview.

“Early in my life, I went through what I think a lot of gay people go through, thinking that I could change and pray it away,” she explained at the time.

Chely told Shaun that she felt she was living a lie, especially when it came to her relationship with fellow country music star Brad Paisley, who was not aware that she was gay.

“When I realized he was wanting forever with me…I could see the damage I was doing to him, and I cut him off completely, cold turkey,” she added.

The country star also revealed that she even considered taking her life in 2006.

“I was looking at myself in a mirror…as I was about to do it,” she explained. “I just looked at myself and something snapped and I started to cry…and I realized I have too much to live for.”