Rabbi Yitzchok Chayempour with his daughter Esti moments after they were reunited. 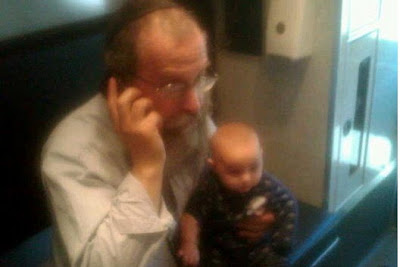 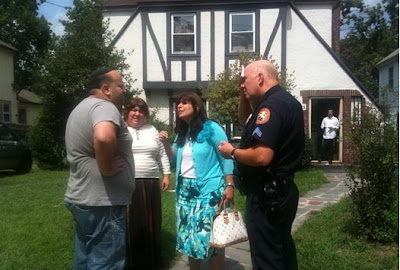 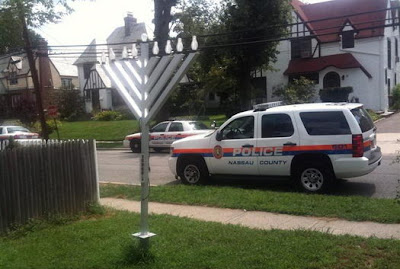 Just 24 hours earlier, the child had been briefly abducted by the family's just-laid-off housekeeper, officials said.

"God did a tremendous miracle for us," the mother, Tammy Hayempour, said as Esther cooed in the family's living room, fresh from a nap.

Police said the live-in housekeeper took the infant daughter from the family's Allenwood Road home Wednesday morning because the family of 13 has "so many children that they just don't have time for her," according to a statement the housekeeper gave to police that was included in court records.

The housekeeper, Gloria Suarez, planned to take the baby out of Nassau County -- as far away as her native Uruguay, authorities said.

Suarez was arrested within hours of taking the infant, police said.

On Thursday, a Nassau judge ordered Suarez, 55, jailed without bail. She faces charges ranging from kidnapping and child endangerment to obstruction of governmental administration and resisting arrest. A judge also issued an order of protection for the baby, Esther "Estee" Miriam Hayempour.

Suarez's court-appointed attorney, Yolanda Guerra, said that the housekeeper denied all of the allegations.

According to a statement Suarez gave police after being captured at the Roslyn train station, the housekeeper said, "The Hayempours have many children. . . . They . . . don't take care of their children."

Said Suarez: "I knew that the baby would get more love and attention from me than she would ever get from those people."

Tammy Hayempour, 42, said she'd trusted Suarez completely and had no idea that Suarez was at all bothered by the fact they have 11 children, who range in age from Esther to a 22-year-old. "She was such a kind person, I didn't think she'd do anything malicious," Hayempour said.

In fact, Hayempour said, she didn't panic when the baby went missing because she'd thought so highly of Suarez. "I was sure she was in the park somewhere," she said of Suarez.

The infant's father, Yitzchok Hayempour, who is the rabbi of Ohel Menachem in Great Neck, spotted Suarez with the baby on Middle Neck Road at about 10:20 a.m., authorities said.

When he saw Suarez, he grew suspicious because his daughter was not in a stroller and Suarez wasn't supposed to have her, according to Det. Sgt. Steven Zeth, a supervisor from the Manhasset-based Sixth Squad, one of several police forces on the case.

Hayempour parked, but by the time he did, Suarez was gone.

The family searched for the child themselves but soon called 911 and the police began their search. Suarez and the infant were found just after noon, according to court records.

When she was cornered at the Roslyn railroad station, Suarez struggled with officers trying to wrest the infant from her arms, police said. "You aren't taking my baby! This is my baby!" she yelled to officers who spotted her trying to flee, police said.

Suarez, of Manhattan, had been hired through an agency about six weeks ago. She was laid off Sunday because the family didn't need her any more, police said.

Tammy Hayempour recalled Thursday how the day before the alleged abduction, Suarez said she needed to stay in the home because she had not secured a place to live. Tammy said Suarez also offered to take care of Esther the next morning. "You could sleep in," Tammy recalled Suarez saying. "You'll have a good sleep."

GREAT NECK, NY — It is every parent’s worst nightmare, and for Rabbi Yitzchok and Tamar Chayempour, Shluchim in Great Neck, Long Island, it came true this morning when their live-in maid walked out and vanished with their six-month old daughter Esti.

The horror began to unfold at 9:50 this morning, when Rabbi Yitzchok Chayempour spotted their live-in maid walking along Middle Neck Road with his child. After calling out to her and asking what she was doing, she responded that she was heading over to the CVS pharmacy up the road. After attempting a quick U-turn, the maid vanished and the frantic search began.

The maid, Gloria Suarez, a 53-year-old native of Uruguay, had been in the United States for 11 years on a work visa. Ms. Suarez had been a live-in maid with the Chayempours over the summer months. She was hired through an agency that vets and does background checks on all the maids that they refer before recommending them for hire.

According to the family, Ms. Suarez had finished working for them this past Friday and had moved her belongings out, but she had requested to stay a few more days until she had arranged her new place to stay, which the Shluchim allowed.

After losing sight of Ms. Suarez, R. Chayempour sped up to the CVS in search of the maid. “She was only a maid and was absolutely not a baby sitter, we made sure to never leave her alone with Esti, or any of the kids” he said.

When he could not find her at the store, he returned home to check if she was there. He asked his wife if she let the maid take the baby out, and she responded that she had not left Esti alone with her, and that she didn’t even know that she had left.

Right away family members began a frantic search, going store to store, and mobilizing the community to search for the maid. Minute to minute it became increasingly clear that this was, in fact, an abduction.

Over the past few weeks Ms. Suarez had expressed much interest – almost too much – in the child to Tamar Chayempour, telling her that she was married once only to be divorced shortly after and never had any children of her own. The maid’s interest in the child was slightly off-putting to the mother, especially after she kept asking to take little Esti out on walks in her free time – requests which were consistently turned down.

Nassau County Police were notified, but the police were reluctant to rush and classify the incident as an abduction, saying that they needed to wait more time, and that maybe the maid would show up with the infant.

This wasn’t satisfactory to the family, and the father’s own frantic search led him back to the CVS, where he ran into a member of his community who recommended that he check the local bus station, since that would be a preferred method of travel for the maid.

Of the only two bus lines that run in the area, Yitzchok ran over to the bus stop and asked one of drivers if he remembered the maid, who has very distinct long silvery hair. To his luck, the driver remembered dropping off a pair with the exact description! He even remembered dropping her off near Stepping Stone Park.

The father rushed over to the park where he met the park security and asked them if they had seen the maid with a child. Once again thanks to her distinctive appearance they had remembered the maid, and that she thought that the park was a train station. Thinking she was confused, security called a taxi for her, but they did not know what her destination was.

It was around this time that the police started getting proactively involved in the search. After learning that the maid had gotten into a cab, the police reached out to all the local cab companies, and moments later got a response from one of them saying that they had just dropped off a pair of passengers matching the description at the Roslyn Train Station.

Roslyn Police were immediately notified and they rushed over to the station, where they found the maid with the baby standing on the platform waiting for a train. When police asked her whose baby it was, she replied that it was her own. When they inquired further, she changed her story, saying it was her brother's child and she was going to meet him.

When police attempted to take the maid into custody, a struggle broke out as she refused to part with the baby; only after some negotiations did she give in and police placed her under arrest.

A short while later, little Esti was was reunited with her father and mother.

“When my husband came into the house looking for Esti and Gloria and we started looking for them, I wrote in to the Ohel, and that is when we started getting leads which ultimately lead to us finding our baby” said Tamar.

“The fact that I was even on Middle Neck Road at that time was a matter of pure Hashgocho Protis, since I am usually in the camp office by then” said Yitzchok, adding “I was on my way home from attending a bris this morning, mamash Hashgocho Protis.”