Plenty of room for the buckets and spades! The Obama motorcade hits the beach (and Michelle dons headphones instead of listening to her husband) 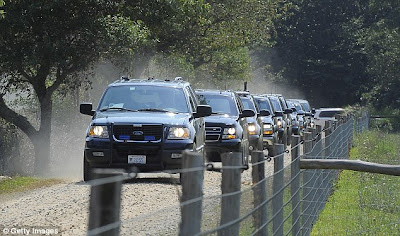 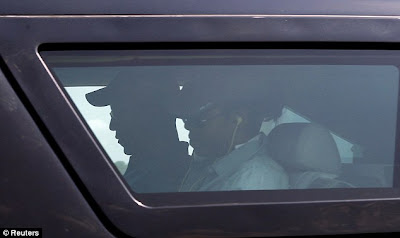 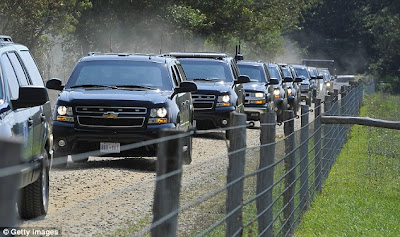 As the East Coast awaits the full wrath of Hurricane Irene, the first family clearly are not letting it get in the way of a little leisure time in Martha's Vineyard.

President Obama, his wife Michelle and their daughters took to the beach Thursday afternoon in a 12-strong motorcade.

With so many vehicles, there was plenty of room for the towels, beach balls, bucket and spades and other seaside necessities.

The President and First Lady sat together in one of the heavily fortified vehicles, but there was no talking.

She could be seen wearing headphones, perhaps listening to music.

On Thursday morning Mr Obama was briefed by his top counter-terrorism advisor, John Brennan, on overnight developments in Libya.

He was told that it is expected to make landfall in the Carolinas by Saturday morning.

Josh Earnest, the president’s principal deputy press secretary, said in a statement: 'The president directed his team to ensure all needed resources are included in the preparation efforts and asked them to continue to closely coordinate with state and local officials in those areas that are likely to be affected.

The group discussed 'the progress being made on the new jobs proposals and deficit reduction measures that the economic policy team has been developing this week,' Mr Earnest said.

Then after all the serious stuff was done, it was time to leave the Blue Herron Farm compound in Chilmark for a private beach nearby.