Fears for Nancy Reagan, 90, as she slips and falls 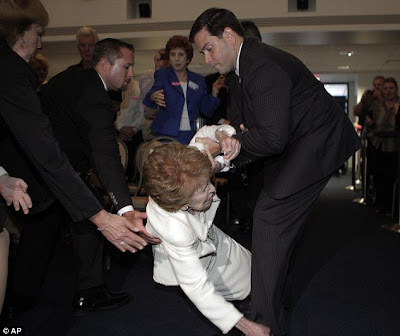 Nancy Reagan last night lost her balance and fell as she arrived to watch a speech by Republican freshman senator and Tea Party darling Marco Rubio
The frail former First Lady was being escorted to her seat in the Ronald Reagan Presidential Library, in Simi Valley, California, by Senator Rubio when she lost her footing and took a tumble.

Mrs Reagan had asked Senator Rubio to speak at her late husband's presidential library following his election to the U.S. Senate last year
The pair had arrived to a standing ovation, but there were hushed gasps as the 90-year-old, who was leaning heavily on a walking stick, slipped and the Senator Rubio leapt to catch her.

Assisted by onlookers, the senator for Florida helped Mrs Reagan back to her feet and the applause resumed. A library spokesman told CNN that she was unhurt in the incident.